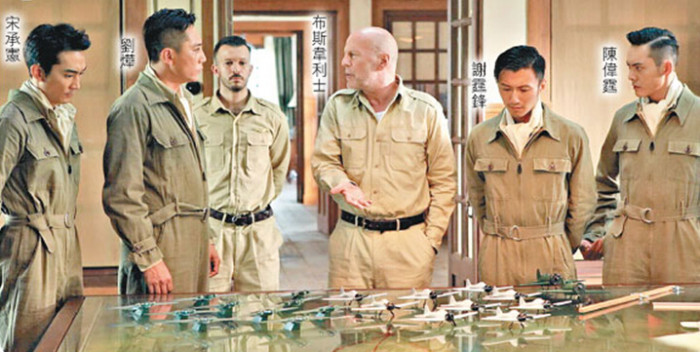 It used to be called “The Bombing.” Then it was called “Unbreakble Spirit.” Now it’s called “Air Strike.” And we may finally be seeing the all Chinese language movie Bruce Willis made in 2015, directed by newcomer Xiao Feng.

You may remember this was the project that Mel Gibson put some money in during his extreme estrangement from Hollywood. (Now he’s just in a regular estrangement.) Mel got a credit on the film as Art Director.

In May 2016 I spoke to insiders who said the movie would probably never come out. But now Lions Gate Home Entertainment has its name on the credits, so it’s possible it’s coming soon to a home  DVD release.

The “Air Strike” title is a new development. At the end of June, Variety reported it was called “Unbreakable Spirit.” (There was no mention of Lions Gate then.) There were also accusations of financial misappropriation.The film either cost $22 million or $90 million depending on which set of books you’re given.

Right now “Air Strike” is set to open in China on August 17th. The movie also features Adrien Brody (although he may have been added in reshoots). Bruce’s daughter Rumer Willis also has a role although Willis told me in 2016 that it was a coincidence.

There is a trailer. Here it is. Bruce doesn’t say a word in it, but this sort of par for the course with the former ad-libber.