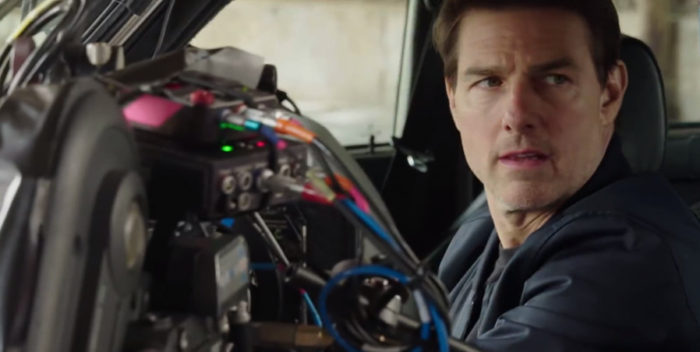 Of all the movie mega franchises, I love “Mission Impossible” the best. Lalo Schiffrin’s score is an aphrodisiac to me. And the rest may have something to do with the hero Tom Cruise as Ethan Hunt, a man of super capabilities who gets the job done. Whatever crazies animate him, he is willing and able to rescue a detonator from the edge of a rock cliff, hang from helicopters, and mess with equally crazy women.

The blond “widow” in “Mission Impossible: Fallout” makes Rebecca Ferguson’s Ilsa the picture of propriety, even when she, leather clad, races around Paris on a motorcycle in hot pursuit of Cruise and his posse: Ving Rhames’ Luther and Simon Pegg’s Benji and the nut job of a villain/ social anarchist (Sean Harris) that must lead them to the prize, three globe-like balls of Plutonium. We are saving the world here from crazies who believe, the more suffering, the greater the peace. Now I totally understand why chemical warfare on civilians is so necessary!

The director/co-writer Christopher McQuarrie addressed the packed all-media screening explaining, as if anyone did not know, that Tom Cruise does his own stunts. That introduction added to the visual pleasures at hand, but also the anxieties in that when ever Cruise jumped out of a helicopter, for example, that meant that a camera person was doing it with him only backwards. They had to hire a stuntman who knew how to take the footage but had to learn narrative techniques on the job, in multiple takes.

Cruise trained 16 hours/day for six weeks to get the required papers to man his own copter, which he did, and raced around Paris with a shattered ankle. Needless to say, he looks great doing it and is the consummate hero. Kudos, too, to Ferguson, Henry Cavill, Angela Bassett, in various places on the hero-villain spectrum, and to Alec Baldwin, who, despite always being Alec Baldwin, is just great! And the platinum blond (Vanessa Kirby, Princess Margaret to you “Crown” fans) as ambiguous morally as her hair color; though they flirt with a brush of a kiss, as if she is trying Cruise out, there’s no action here, unlike the fast pace of this 2 ½ hour film.

If only world peace were as simple as rescuing a detonator from the edge of a rock cliff!