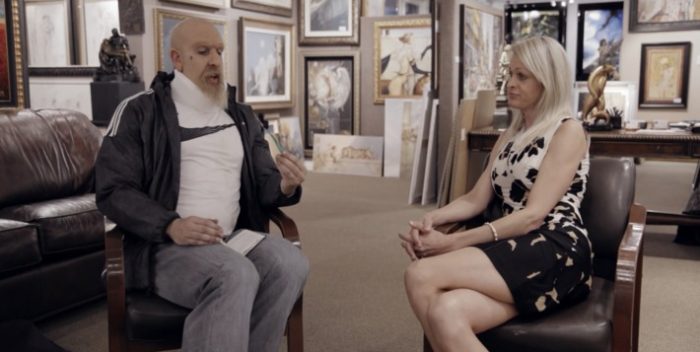 EXCLUSIVE Christy Cones became an overnight celebrity last night courtesy of Sacha Baron Cohen. She was hoodwinked by the man who is sometimes Borat or Ali G. When Cohen and his camera crew hit her Coast Art Gallery in Laguna Beach, California last year, she thought he was a recently released felon who made art using bodily fluids.

In the show, “Who is America,” which aired last night on Showtime, the attractive blonde eventually gave “artist” Ricky Sherman a pubic hair plucked right in front of us, from under her dress, to include in an art project.

Did she really do it?

“Funny the things a camera will make a person do when it’s in your face,” Cones said, with a laugh. “Maybe it’s just the beginning of my relationship with him as an artist.”

If Cones is on the level– and I think she is– what comes across in her segment of “Who is America” is that she tries so hard to be accepting of Sherman. She is guileless. Maybe  she’s discovering a great artist–this thought flashes across her forehead. To a cynical New Yorker, she’s very sweet.

One thing we don’t know yet is if Ricky Sherman went back to the Coast gallery, or if Cones is going to turn up in more episodes.

It does seem as though Cones was genuinely duped, and that she didn’t know it was Borat/Cohen who allegedly painted a picture of her using his feces and ejaculate. She’s handling it pretty well, without looking like a rube.

She told me of Cohen: “The guy’s a genius.” She added: “It was serendipity that I was chosen” and noted “the importance of satire.”

Cones is entertaining invitations from talk shows, etc for interviews. We may be seeing her in New York before too long.