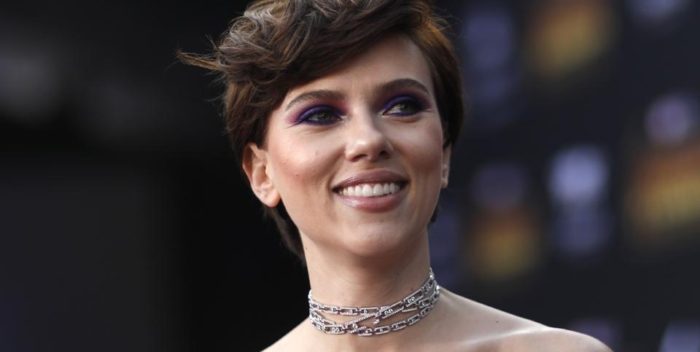 Some cockamamie story emanated from Megyn Kelly’s awful TV show yesterday that came out all botched like a whispered part of a “telephone” game.

I can tell you what really happened: Johansson, like a lot of actresses, were brought to the Scientology Celebrity Centre in the spring of 2005 to audition for “Mission Impossible 3.” Many of them realized later that they’d also been brought there as potential girlfriends for Tom Cruise. Katie Holmes was one of those actresses. She got the girlfriend job. Michelle Monaghan got the part.

Other actresses who told stories later like this included Jennifer Garner. If you recall, later, it was reported that Cruise started calling Garner with an idea of dating her. Ben Affleck told Cruise to buzz off, or else. (This was back before Affleck and Garner’s marriage and divorce.)

All these stories turned up years later in Lawrence Wright’s award winning book, “Going Clear.” Cruise also had a Scientology fix up with actress Nazanin Boniadi.

Johansson herself told me that she’d been brought to the Celebrity Center to meet Cruise for “Mission Impossible 3” and and kept there for around eight hours. There was a lavish meal set with her and Cruise. They showed her around the facility and offered to give her an e-meter test. (I can’t remember if she took it.)  Johansson was horrified. She sensed something else was going on, had no intention of becoming a Scientologist or Cruise’s girlfriend. She’s a New York girl. She bolted. End of story.

Scarlett certainly didn’t “go on an audition to become Tom Cruise’s girlfriend.” No one did. No one new that’s what Cruise or Scientology had in mind. The Cruise marriage to Nicole Kidman had ended five years before. In that time, there had been public “fix ups” with Penelope Cruz, and with Sofia Vergara. Cruise was about to embark on publicity for “War of the Worlds.” He needed arm candy. After he “obtained” Katie Holmes, of course, there was a ton of publicity. Eventually Cruise went couch jumping on “Oprah” and fought with Matt Lauer on “Today.”

The rest, as they say, is misery.

The newly engaged Katie Holmes still has some explaining to do to her friends and family.

There were 16 days in April during which no one seems to know where she was.

Holmes made a public appearance on April 4 at the premiere of “Steel Magnolias” on Broadway.

She came with her publicist, Leslie Sloane Zelnick, and a couple of other friends. They were there to support Rebecca Gayheart, who was making her Broadway debut.

I know this because I spoke to Holmes at length during the play’s intermission. She said she had just moved into her New York apartment and was looking forward to seeing the city.

I also know that on April 4, she had not yet made the acquaintance of Tom Cruise. She briefly dated Josh Hartnett after breaking up with actor Chris Klein.

Hartnett, Klein, Cruise: Which of these three is not like the others?

Klein and Hartnett are young and tall. Cruise is middle-aged and height-challenged.

On the other hand, he’s the biggest movie star in the world. They are not.

Holmes was busy during that first week in April. On April 7, she was photographed at the Fragrance Foundation’s FiFi event.

Four days later, Holmes was still in New York and was photographed at VH1’s “Save the Music” concert. She still had not met Cruise.

Sometime that week, her friends say, she flew to Los Angeles for a meeting with Cruise about a role in “Mission: Impossible 3.” The meeting took place after April 11.

The next time anyone heard from Holmes was on April 27, when she appeared in public as Cruise’s girlfriend and love of his life.

Where was she during those 16 days?

Somewhere during that time, she decided to fire both her manager and agent, each of whom she had been with for years and who were devoted to her.

The manager, John Carrabino, also handles Renée Zellweger and is beloved by his clients.

The Feshbach family, according to published documents, has donated millions to the Church of Scientology. Jessica’s aunt even runs a Scientology center in Florida.

According to Richard Behar‘s now famous 1991 story in Time magazine about Scientology, the Feshbachs were the subject of congressional hearings in 1989.

Behar wrote: “The heads of several companies claimed that Feshbach operatives have spread false information to government agencies and posed in various guises — such as a Securities and Exchange Commission official — in an effort to discredit the companies and drive the stocks down.

“Michael Russell, who ran a chain of business journals, testified that a Feshbach employee called his bankers and interfered with his loans. Sometimes the Feshbachs send private detectives to dig up dirt on firms, which is then shared with business reporters, brokers and fund managers.”

The risk-taking Feshbachs, known the world over for making their fortune “shorting” stocks, and the level-headed, conservative Holmeses would be a difficult mix at a dinner table.

Katie’s father, Martin Holmes, is the senior partner in a large and respected Toledo, Ohio, law firm. His son, Martin Jr., has recently joined the firm. He’s a Harvard graduate. Katie’s mom, Kathy, is frequently cited in Toledo for her charity work.

There is some fear among Holmes’ close circle that her instant romance with Cruise is not as organic as portrayed.

For one thing, Holmes was raised a strict Catholic. Also, gone from the picture are two close Holmes friends who used to be with her when she did publicity for a film.

One of these is Meghann Birie, a childhood friend who has suddenly disappeared from Holmes’ world. Another, a local TV producer here in New York, was too afraid to discuss the situation with me.

We know that Cruise auditioned several actresses for this role before settling on Holmes. This column reported a story about Jennifer Garner. There have been published stories about Kate Bosworth, Lindsay Lohan and Jessica Alba being approached.

A newer one involves Scarlett Johansson, who ran for her life when presented with a fait accompli dinner at the Scientology Celebrity Centre in Hollywood.

And history has been rewritten since the April 27 unveiling.

Curiously, since the Cruise-Holmes situation popped up, we have heard over and over again that Cruise was the young actress’ idol when she was growing up.

That’s certainly interesting because all of the publicity that used to run on Holmes — still found all over the Internet — lists another Tom as her favorite actor.

That would be Tom Hanks.