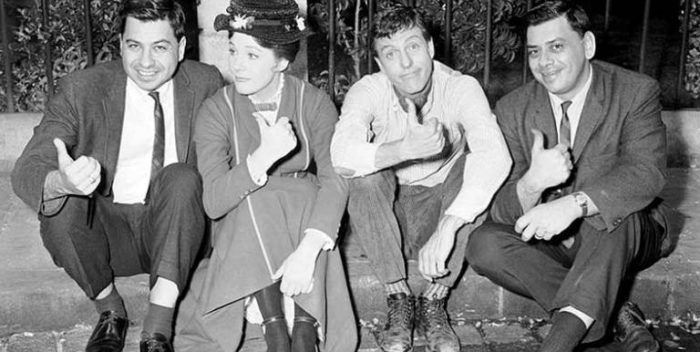 With the new Emily Blunt- Lin Manuel Miranda “Mary Poppins” coming this fall, the great songwriters Richard and Robert Sherman are back in the spotlight. The Academy honored them last night with  “Sherman Brothers: A Hollywood Songbook”  and oh what a night it was.  Richard Sherman, who just turned 90, was there in full force to revel in the night.  (His brother and writing brother Robert passed away in 2012 at the age of 86.)

The evening was hosted by John Stamos, a true fan boy who explained his life long love of the Sherman’s music and the relevance it has today.  “Their music is an poignant now as it was back then. The same light that shines on a child in Disneyland seeking joy shines on a child in Syria seeking shelter.”

LeAnn Rimes entranced the audience with a knockout version of “Stay Awake” from “Mary Poppins.” Keala Settle — fresh off her Oscar nominated hit with “This is Me” — got the night’s musical numbers started with “It’s A Small World” written by the Shermans, which became Disney’s park theme song.

But the star of the night who everyone had come to see was the amazing 92 year old Dick van Dyke, who MUST receive a Kennedy Center Honor this year.

DvD told a story about the Sherman brothers and  “Mary Poppins.”  “The brothers never made fun of my Cockney accent. A lot of people did.  I don’t even bother to go to England anymore.”  DvD said Walt Disney “saw the world through the eyes of a child.  He had this vision. The Shermans shared that vision, their music goes straight to your heart.  I realized on “Mary Poppins” that we were creating something that hadn’t been before.”

Then along with the barbershop quartet Vantastix, van Dyke performed a medley of his hits, and yes, he rapped a version of “Spoonful of Sugar,” and danced like he was a 25 year old.

Hayley Mills surprised the audience by reprising “Let’s Stay Together” from “The Parent Trap.” The room exploded with applause. The youthful Mills came on to explain her history with the duo. She starred in “The Parent Trap” 58 years ago and like van Dyke, appears wonderfully youthful. (Maybe it’s from the Shermans’ songs.)  She continued, “Walt Disney introduced us. I think we probably all took it a bit for granted.  He was the original Big Daddy.  Your songs will survive for all time.”

One surprise guest was Johnny Whittaker, who was the child star of the TV series “Family Affair.” He starred in the title role of Tom Sawyer, another movie with a Sherman score.

Richard’s son, Gregg, and Robert’s son, Jeffrey (married to the talented writer/comedienne Wendy Liebman) paid tribute to their dads.  Jeffrey noted that his father, “at age 19 was the first American soldier to liberate Dachau.”

Richard Sherman came on at the end to thunderous applause and a rousing standing ovation.  He noted his bond with his late brother.  “Robert told me to stick with him and that one day we’d be wearing silk pajamas.”   He then played the piano and sang “Supercalifragilisticexpialidocious,”  to the delight of the crowd.  He said poignantly, “I’ll never forget this night.”  Nor will anyone in the audience.  The evening ended with the audience standing singing, “Lets Go Fly A Kite,” with kites all over the room.  The Academy got everything right on this one.