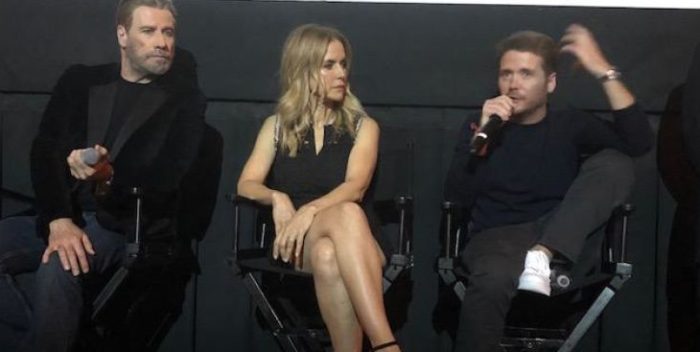 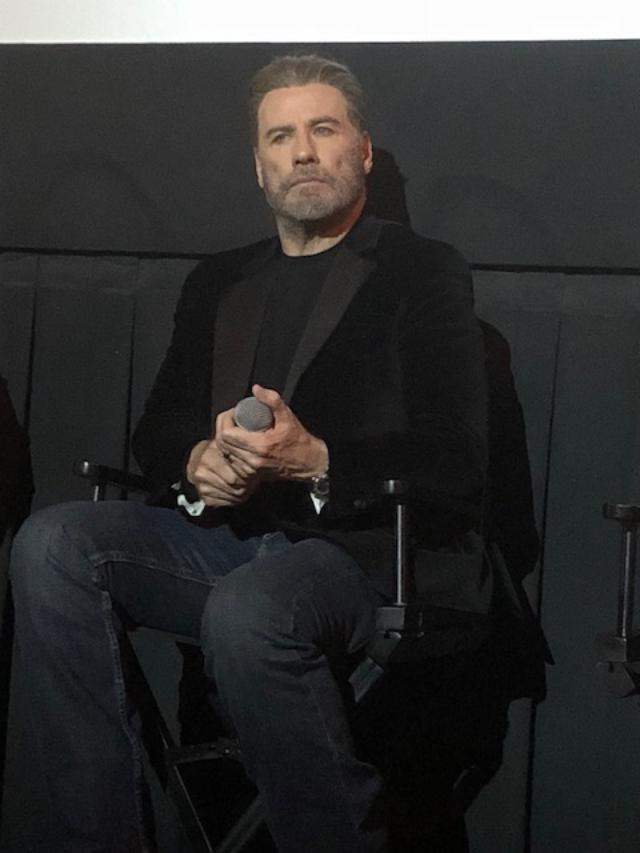 John Travolta, wife Kelly Preston and director Kevin Connolly were the big draw Friday night for a Q&A following the 7:15 screening of their new film “Gotti” at the AMC Lincoln Square. Travolta plays the titular mafia don and Preston plays his long-suffering wife Victoria. Flanked by two tall security guards, who didn’t stop the countless fans who continually stopped the accommodating Travolta for selfies, the trio finally made it to the front of the packed theater filled of rapturous fans to participate in a 40-minute moderated discussion.

The movie is mainly a sympathetic look the mafia leader or as sympathetic as it’s possible to be to a gangster who murdered people but loved his kids and was loved by his neighborhood.

“Gotti” took eight years to make and went through countless directors, cast members and producers. Travolta has been committed to the project since the beginning. His strongest work is in the prison scenes and private exchanges with his son John Gotti Jr. (Spencer Lofranco), who wants to get out of the mafia life, that showcase his legendary acting chops.

Following are highlights from the Q&A with the enthusiastic actor, his wife and director:

Gotti did a lot of bad things. Did Travolta think he deserved the hero persona on the streets of New York that the movie portrays?

“First of all I’m playing a movie (character) from his viewpoint. I have no right to judge him or make him personable. I have a duty to perform his part, so I can’t get into moral judgment,” said Travolta, to while clapping from the audience.

Added the actor, much of the screenplay was based on John Gotti’s book, “Shadow of My Father.” “Our jobs as storytellers and filmmakers is telling the story through their eyes. Like it or not this is how they felt about their father.” The actor noted that this was “not a glamorized look at his life,” and the movie didn’t stint on showing the gory details about his final days and the thyroid cancer that took his life.

As for the family’s reaction to the film and whether it was cathartic, sad, and maybe even freeing?

“It was all of that,” said Travolta. “It was cathartic. They were deeply moved by it. … There’s always some relief when you tell the truth. And everybody’s truth is different but we told their truth.”

Said Preston: “John Gotti Jr.’s seen it several times but Victoria has never seen it and the daughter’s never seen it. It’s very difficult for Victoria to see it right now so John has said… Victoria told her, ‘It’s very tough life… I grew up very poor. We met when I was 17… She had to raise the kids alone while he (Gotti) was in prison…”

Travolta added, “They were the ones who wanted this to be a movie… This is a really honest portrayal of what they experienced… and the audience seems to love it.” (The audience whopped in agreement.)

“How did you like the music?” Travolta asked the audience? Again they cheered.

The music, which is terrific, is by Pitbull, who is credited as Armando Christian Perez. Travolta said the singer saw a scene from the film — “It was the courtroom scene where I kind of look identical to him (Gotti)” said Travolta — and asked, “‘Would you let me write a song for the movie?”… We hopped on board with great enthusiasm,” said Travolta.

“We needed it,” added Connolly, who said they had a small budget and shot the film in 22 days.

Travolta was asked if on the first day of the shoot he was scared at all for finally doing the character for real?

“No because I think if you do your homework and you build your character and you start to own the character you can assume the being of that person in a second, so I think if you feel like you have not arrived at that moment you get scared. But there’s no reason to get scared because I felt like I was ready already. You know, let’s go!”

Never have I seen a more enthusiastic audience — none of them press — who were eager to ask Travolta questions.

When someone in the audience favorably compared his portrayal of Gotti to Marlon Brando in the Godfather, Travolta replied, “There’s no one who would be happier that Marlon Brando. He was a good friend of mine for five years and he would be the happiest of anyone.”

What are the roles he wants to play in the future?

“I feel like I’m a muse for writers. I like portraying what they come up with but one role about Vince Lombardi was offered to me and I think that would be an interesting role to play. My dad actually worked with him in football years ago and that might be another Italian I’d like to play.”

Cracked Connolly, “You know I know a lot about football… I’m just saying.”

Travolta on why he chose Connolly to direct: “There were three or four other directors, but Kevin was the first one who was so in love with the history of this family and the history of the mob that i felt his vision would actually come to fruition and that’s why I was enthusiastic about Kevin doing it. (Also) he was my favorite actor in ‘Entourage.’ He just nailed it.”