UPDATE THURS MORN: Overnight, Roseanne banned me from Twitter. I am very thrilled and honored.

She also claimed that her whole “Planet of the Apes” Tweet to Valerie Jarrett was about anti-Semitism since author Rod Serling had originally adapted the story to the Twilight Zone for that purpose. She continued in this rambling and ridiculous way for more Tweets. Eventually said that it came from dreams about Holocaust survivors she’d grown up with, then deleted that Tweet.

EARLIER Roseanne Barr is back.

She now asks fans on Twitter to watch a documentary about Malcolm X by Nation of Islam member Thomas Muhammad.

She says Muhammad speaks for her and was her “campaign” manager in 2012. Only, Roseanne’s 2012 campaign manager was another Muslim named Farheem Hakeen, a woman.

What is going on? Does it matter, really? She’s nuts, she’s lost it. The whole thing is a mess.

2) I’ve been watching this new doc called "Malcolm X: An overwhelming Influence on th Black Power Movement.” Directed by my dear friend Thomas Muhammad (my campaign manager in 2012)who called me immediately when my show was canceled. https://t.co/honkeu54wl
password-FINALXDRAFT 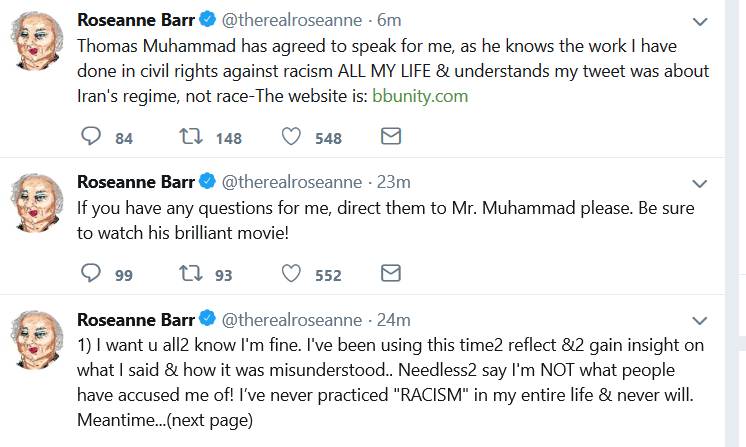