Just as we were hitting the sack last night on the East Coast, Roseanne began Tweeting that Ambien made her write the racist rant against Valerie Jarrett.

But in 2013, Roseanne wrote a similar racist rant against another Obama aide, Susan Rice. Was that because of Ambien? 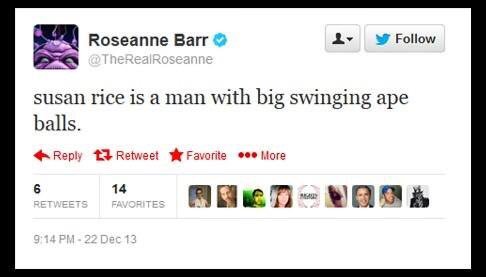 Roseanne is a racist. She’s also a conspiracy theorist who re-Tweets nonsense from other crazy people on the internet. These re-Tweets are anti-Semitic, which is interesting since she claims to be Jewish. But she continually sends out messages about philanthropist George Soros, claiming he’s a Nazi and hurt other Jews in a concentration camp. Roseanne can’t do any math apparently, since Soros was 13 when he and his family fled the Nazis.

She is completely vile. Not a single word of apology on Twitter will help her.