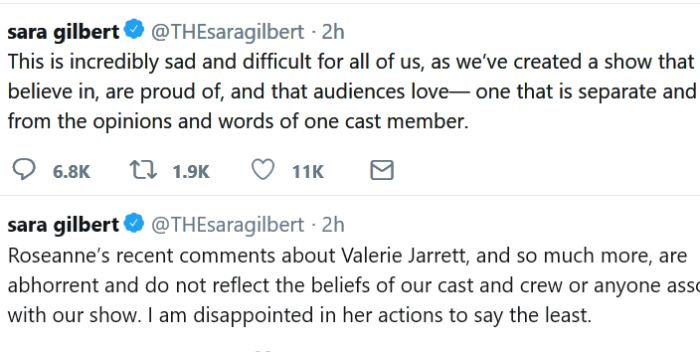 It was Sara Gilbert who brokered the return of “Roseanne” to ABC. She’s the Executive Producer, having played Darlene on the original show. She invented and co-hosts “The Talk” on CBS as well.

Gilbert must be crushed by the cancellation today.

She’s Tweeted this: “Roseanne’s recent comments about Valerie Jarrett, and so much more, are abhorrent and do not reflect the beliefs of our cast and crew or anyone associated with our show. I am disappointed in her actions to say the least.This is incredibly sad and difficult for all of us, as we’ve created a show that we believe in, are proud of, and that audiences love— one that is separate and apart from the opinions and words of one cast member.”