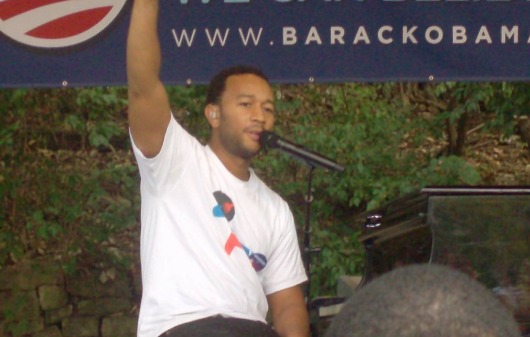 John Legend has texted Kanye West in regard to his Twitter meltdown yesterday that included more endorsements of Donald Trump– and Trump responding in kind to West.

Kanye posted Legend’s text to him and his response. It should be noted that Legend was discovered by West, who produced his first album, the one that made him an international star.

John Legend says to Kanye: “I hope you’ll reconsider aligning yourself with Trump…don’t let this be part of your legacy.”

West responded: “I Love you, John. You bringing up my fans or my legacy is tactic based on fear used to manipulate my free thought.” He also wrote: “I tweeted the John text to show that there are people around me that disagree with me and voice their opinion. I respect everyone’s opinion but I stand my ground.”

Legend, by the way, joked back to West in another text that as long as Kanye was publicizing their texts he — Legend– has a new single out today. Funny.

Kanye has put himself in a difficult position here after yesterday’s tsunami of Tweets and what looks like another one today. Of course, he has roped in Chance the Rapper, who immediately responded to Kanye’s endorsements of Trump by saying that not all black people had to be Democrats. A couple of hours he amended that to say they could be Independents.

But mostly Kanye’s colleagues, peers, and friends have chimed in on Twitter either denouncing him or imploring him to change his mind about Trump. That won’t happen– Kanye West is now a Kardashian, living in gated Calabasas, overcome by their shallow Republican lifestyle. Yesterday, he invited TMZ’s Harvey Levin into his studio so he could get a good plug on that website. That’s a Kardashian-Trump move if ever there was one. But this is Kanye’s world now– his mother is dead, they are his family. He’s like Patty Hearst once the SLA got her.