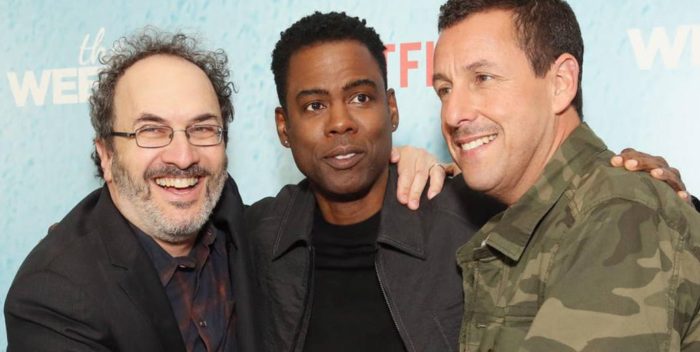 Adam Sandler, who is always taciturn when it comes to talking to the press, told journalists on the red carpet at the premiere of his new comedy, “The Week Of,” Monday night at the AMC Lincoln Square, “Hopefully people will connect with it and why we did it.”

Sandler plays a working class dad who wants to give his daughter (Allison Strong) the wedding of her dreams. Chris Rock plays the wealthy surgeon dad of the groom who volunteers to pay for the wedding Sandler’s character can’t afford.

Rock said on the red carpet, “Adam’s the lead, I play the tambourine. I play a mean tambourine— and we got a guy with no legs (in the film) so that made for interesting banter.”

Robert Smigel, a Saturday Night Life writer, is making his feature directing debut with the film. He also co-wrote the script with Sandler.

Smigel is probably best known as the creator of Triumph, the Insult Comic Dog. He’s a sort of Don Rickles of puppets, a Rottweiller with a growly voice and a bad attitude, always chomping on a cigar. Triumph hasn’t been around for a while. On the red carpet I asked Smigel what it was like being in the director’s chair for the first time and what Triumph was up to.

What would Triumph say about this movie?

Robert Smigel: (He launches into Triumph’s scratchy voice) “I can improve on the script. Give me five minutes and a couple of drinks of water and … I read it. I’s very absorbing.”

Where’s Triumph been during all the political meshuggah?

RS: He’s been in a Duane Reade bag. I actually had to make a choice. Adam offered me this opportunity and I decided I was going to take pretty much the whole 2017 (off to do it). I was excited about this project and I felt like I got a lot of Triumph in 2016. And you know what, it became less fun the fewer candidates. I started in Iowa, New Hampshire, then it was the conventions and then it was just the last man standing. Everybody’s piling on anyway, and I didn’t feel like I had that much more to contribute from that perspective but I will try to get back into it. I’m talking to some people about an insane idea that I’m not sure I can pull off.

What inspired “The Week Of?

RS: It’s a very human, relate-able story. It’s about a father of a bride who doesn’t have a whole lot of money but too much pride to let anybody else pay for the wedding. It was Adam’s premise, but Adam and I, we bring a lot of silly things together but one of the ways we bonded at Saturday Night Life was because we both have very close knit families. We both worshiped our fathers, so you know it was easy for us to write this kind of character comedy. We never go to do it before, so it’s sort of a culmination of our friendship in a way, creatively, to finally get to write about our lives this way.

This is your first time directing a film. So what was it like directing Chris Rock and Adam Sandler?

RS: I mean I know them both so well. They’re both very good friends of mine so I felt very comfortable with them. And Adam especially really had my back. He surrounded me with amazing people. You know the director of photography was amazing, so I really felt like I really had a lot of safety nets, so it was shockingly fun. I didn’t expect it to be. I expected agony. ‘Cause usually when I work, the most fun part is coming up with the initial idea. Then the rest is just executing it. It’s agony just getting every detail right. I’m a detail freak.

It seems critics are always shocked when Adam Sandler does a film like “Meyerowitz Stories” and shows he can act.

RS: I don’t know why they’re shocked at this point. He’s done it so many times. He’s actually amazing in some of his own movies. He never gets credit for that. I think his performance in this movie is as good he was in the Meyerowitz movie. It’s a very human role.

How will this comedy stand out from the other offerings on Netflix?

RS: I hope it stands out a little bit because Adam set out when he had this idea that the movie would not look like a typical summer comedy. It would have more realism, more verite feel to it, almost like an independent film kind of style. We talked about John Cassavetes as one of the directors we admired… It’s definitely got a different energy. We didn’t write it towards one liners, we wrote it towards characters and situations. Some of the situations get very broad, but the characters always stay grounded and recognizable.

You don’t mention the inter-racial aspect of the marriage do you?

RS: I felt like it’s kind of boring at this point to make an issue of it. I wanted to look forward and think about there’s been so much progress in that regards since “Guess Who’s Coming to Dinner.” I thought it wasn’t worth commenting on. There were a couple of times when jokes were suggested that would allude to it and I tried to go out of my way to keep them out of the movie. I don’t think you miss it.

“The Week Of” premieres Friday, April 27 on Netflix.