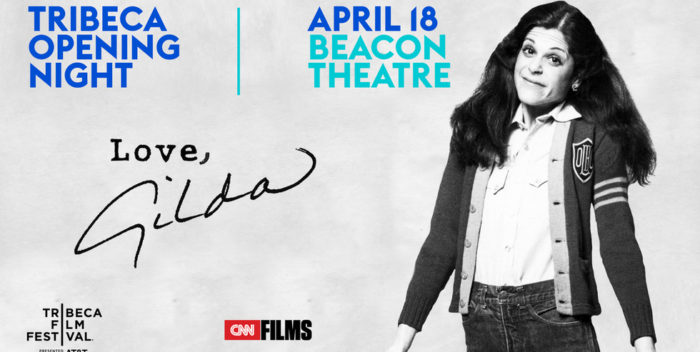 Lorne Michaels sent Tina Fey to introduce “Love Gilda,” the opening night of the 17th annual Tribeca Film Festival, and she was the right choice. Following opening remarks by Robert DeNiro and Jane Rosenthal, Tina choked up a couple of times as she spoke about Gilda who came before her at “Saturday Night Live” a long, long time ago.

Among the many recognizable faces in the audience at the Beacon Theater: Alan Zweibel, Radner’s close friend and famed “SNL” writer who helped her hatch so many great characters including Roseanne Rosannadanna.

But then unspooled “Love, Gilda” a lovely film by Lisa Dapolito and starring Radner, her late great husband Gene Wilder, and numerous of their friends who were in the audience including Paul Shaffer and Laraine Newman.

Dapolito has done what someone should have long ago– made a lasting tribute to Radner, a memher of the original “SNL” cast who became a superstar literally overnight in 1975 along with Chevy Chase (also in the audience), John Belushi, Dan Aykroyd, Jane Curtin, Laraine Newman and Garrett Morris. (Bill Murray came the second year when Chase left.) It’s kind of amazing to look back now and see the original outtakes, promo interviews, etc and realize how they all became huge that fall and lasted and lasted.

Gilda’s talented is what made her, but she was also in the right place at the right time. She was the funny Jewish girl riding a wave that then had begun with “Rhoda” (a TV character played by Valerie Harper), Bette Midler, and Joan Rivers. When Radner hit the air she was the perfect complement to WASPy Jane Curtin and ethereal Newman. Lorne Michaels had arranged the perfect mix.

Dapolito has a sad story to tell if you already know the ending. Radner would die in 1989 just shy of her 44th birthday ovarian cancer. She was married to Wilder, the love of her life. She’d overcome all kinds of obstacles to achieve her fame and met her illness with real grace and courage. Along the way Dapolito shows, most importantly, her incredible comic genius, the development of her many characters, and still gives a little juice about boyfriends, affairs etc. Who knew, for example, that she dated both Bill Murray and his brother Brian Doyle Murray? Well, it was the 70s.

Fey is not in the movie, but making appearances are Amy Poehler, Maya Rudolph, Bill Hader, Cecily Strong, Paul Shaffer, and Martin Short. Of the Not Ready for Prime Time Players, only Newman has a new interview, Curtin is MIA. But several of the original writers are there including Zweibel, Ann Beatts, and Rosie Shuster.  The only quibble I had, which Zweibel echoed– I wish the film had ended with Gilda and Steve Martin’s famous dance number in full. Otherwise, “Love, Gilda” is a must-see. CNN has the rights for TV. It’s hoped a smart distributor will pick it up for theatrical distribution and Oscar consideration.

Spotted at the screening and after party at Tavern on the Green: Billy Crystal, Richard Kind, Ray Liotta, Justin Bartha, Carol Alt, Jennifer Westfeldt, Alysia Reiner, Genevieve Angelson, and director Neil Burger, whose really terrific comedy “The Upside” may see the light of day rather sooner than later.

PS Kudos to Dapolito on a slick production–music, animation, etc all top notch. And her access through Gilda’s family to home movies, photos, seals the deal.