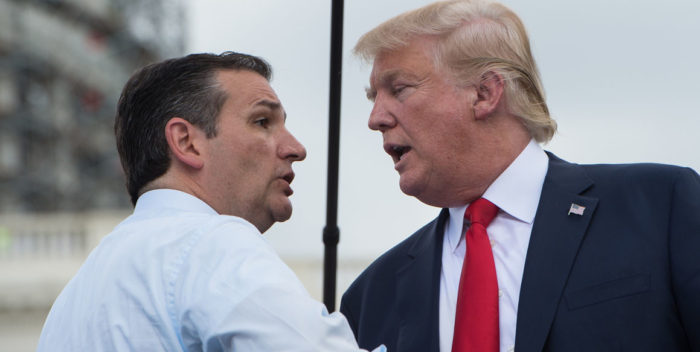 Ted Cruz– it’s hard to believe to he’s still functioning as an independent adult and not tied up in a strait jacket somewhere.

For the new Time 100 — yes, they still have it — Cruz has written a tribute to Donald Trump. Let’s not forget that Trump threatened to “spill the beans” on Cruz’s wife, and implied that Cruz’s father had something to do with the assassination of JFK.

Cruz writes, really, I am not kidding:

President Trump is a flash-bang grenade thrown into Washington by the forgotten men and women of America. The fact that his first year as Commander in Chief disoriented and distressed members of the media and political establishment is not a bug but a feature.

The same cultural safe spaces that blinkered coastal elites to candidate Trump’s popularity have rendered them blind to President Trump’s achievements on behalf of ordinary Americans. While pundits obsessed over tweets, he worked with Congress to cut taxes for struggling families. While wealthy celebrities announced that they would flee the country, he fought to bring back jobs and industries to our shores. While talking heads predicted Armageddon, President Trump’s strong stand against North Korea put Kim Jong Un back on his heels.

President Trump is doing what he was elected to do: disrupt the status quo. That scares the heck out of those who have controlled Washington for decades, but for millions of Americans, their confusion is great fun to watch.

So sad to watch Ted Cruz, who was just plain crazy before Trump now completely crazy with the fruit mixed in. It’s just as sad to watch Marco Rubio, whom Trump belittled into the ground, showing up for event after event like a mistreated dog at the pound.