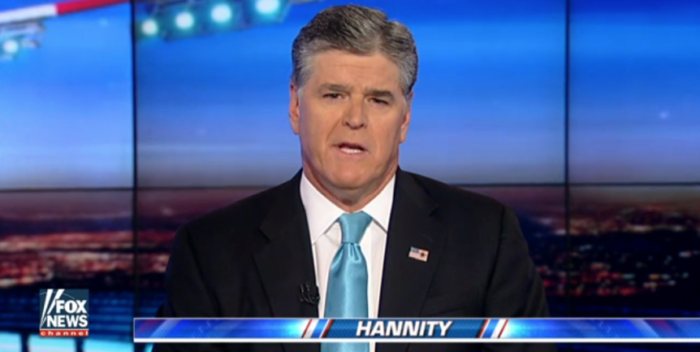 So last night, what happened on cable talk news after the crazy reveal in court that Sean Hannity was the mysterious third client of Michael Cohen?

Hannity did beat Rachel Maddow at 9m but not by much–fewer than 100 viewers, 3.701 million to 3.613 million. Eighty-eight viewers more care to hear Hannity squirm his explanation out to America.

But right after that, Lawrence O’Donnell with 2.928 million flipped the switch of Fox News’s Laura Ingraham who had just 2.831 million.

Much was made the other day by a Fox News press release claiming Ingraham was booming in the ratings. Far from it– she had one good night, last Friday, on the coattails of Donald Trump distract-bombing Syria. Otherwise Ingraham is chugging along behind MSNBC’s O’Donnell.

Again, the Fox News viewers aren’t getting the actual news, but stories catering to old roosters nodding off to sleep after getting their Lipitor. Most of them may not really know what Hannity’s done this time– or that last night Alan Dershowitz criticized Hannity on his own show!