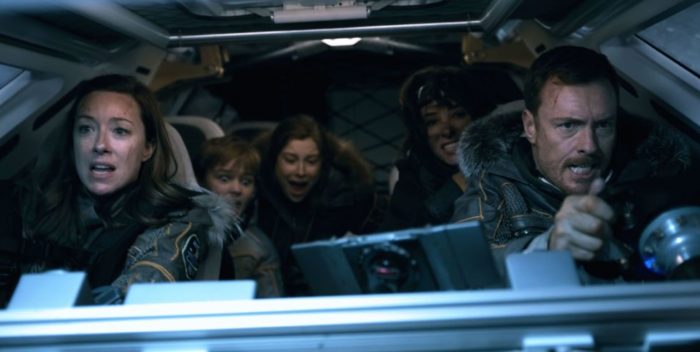 “Danger, Will Robinson!” got the crowd clapping at the premiere of Netflix’s new surefire hit — a 2018 remake of the 60’s classic ‘”Lost In Space” at the Arclight Hollywood Cinerama Dome.  Netflix’s content chief Ted Sarandos got the night started for the appreciative audience which included “Star Wars”‘s Mark Hamill and the original “ Lost In Space” cast members Angela Cartwright,  Mark Goddard, Bill Mumy and Marta Kristen, whose date was her actress daughter, the lovely Lena Kane. (June Lockhart, the great space mom, is 92 so she was allowed to stay home. Guy Williams and Jonathan Harris are gone, somewhere in space.)

One exhilarating episode was shown and this engaging and exciting show quickly kicked into high sci –fi gear. And here’s a little side note: the original “Lost in Space” was brought to us by Irwin Allen, famous for his blockbuster disaster movies. It ran for 84 episodes from 1965 to 1968. The family was named Robinson as a nod to the Swiss Family Robinson, who were shipwrecked in the early 1800s in the East Indies and became famous.

At the after party I chatted with the esteemed British actor Toby Stephens who plays the combat veteran dad, John Robinson.  Toby is acting and theatrical royalty; he is the son of Dame Maggie Smith — Dowager Countess of “Downton Abbey” among other things — and the late Sir Robert Stephens.  I asked the totally down to earth Toby how a lauded British actor such as himself — he’s won numerous awards for his Shakespearean work on stage and screen — wound up in an American pop culture classic?  Stephens explained,  “I grew up for five years in LA because my Mom worked here a lot.  So I caught up on all the American sci -fi shows and have always been a true fan since then.  I never imagined I’d be in one, but I’m sincerely thrilled to be in this. I’m having a blast.”

Toby has an equal acting partner in 12-year-old Maxwell Jenkins who plays the iconic Will Robinson role and is just sensational, he gives a layered, sensitive performance; it also doesn’t hurt that he’s off the charts appealing.  I asked him his highlight of the night.  “Mark Hamill gave me a cough drop.  I actually have a cough drop from Luke Skywalker!”  The rest of the cast — Molly Parker, Taylor Russell and Mina Sundial — round out the complicated Robinson clan and are every bit Toby and Maxwell’s acting equals.  We luckily got a peak of the always perfect Parker Posey (who was at the event as well)  as Dr. Smith at the end of the first episode. Cannot wait to see more of her!

“Lost In Space”‘ premieres globally on Friday April 13th and will surely be another megahit for Netflix.  The show smartly weaves the appealing 60’s sensibility with an imperfect modern day family.  A big budget sci-fi adventure with heart.  Escapist fun and wondrously well done.