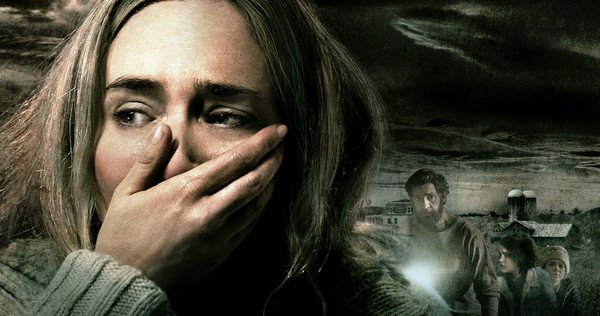 To say that 38 year old actor/director/writer John Krasinski might have reached the pinnacle of his career with his latest “A Quiet Place,” at the outset might seem strange, but John himself admits it could be true as he said on CBS’s “Sunday Morning” yesterday. John noted,  “I know this might be the highlight of my career, and I’m okay with that.”

He later explained that the unabashed kudos he’s getting for his latest film, which he co-wrote (with Scott Beck and Bryan Woods) and directed and which also stars his wife the multi talented Emily Blunt, is unexpected and rattling to him.  But he’s earned all of it.

“A Quiet Place” is truly a revelation.  A simple premise turns out to be an intense, exciting, poignant and ridiculously scary story.  In a post-apocalyptic world, monsters detect their prey by sound.  So whoever’s ieft has to be majorly quiet and in that quietness Krasinski shows how smart and adept he is.  He’s a thoughtful filmmaker, so his telling of the story wastes not one second, frame or even one word, which are few and far between in the film; the characters rely on sign language and gestures.  The sound /or lack of it is the major character here.  And the cast is perfect. He’s the unnamed Dad, Blunt is the fierce tiger mother, Noah Jupe and Millicent Simmonds are their brave kids.  Simmonds, who is a deaf in real life, is heartbreakingly affecting.

From the get go with the Title Cards saying what day it is Day 89 the disaster, the suspense builds and the subtle, clever storytelling pulls you in.  Krasinski is right, Hollywood is tough and this kind of adulation might not every happen again for him. But for now, he’s earned it with “A Quiet Place.”

Paramount’s “A Quiet Place,” will be released this Friday, April 6th.