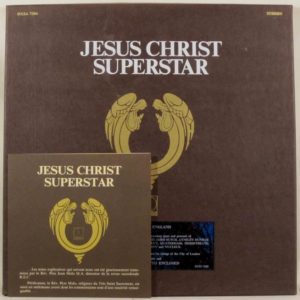 “Jesus Christ Superstar” is live right now on NBC, and the result is that the original box set– digitized– has shot up to number 12 on iTunes. So you can download it.

But if you want it physically–the CD set– you’ll have to wait. Someone at Universal Music goofed. According to amazon, the original version of the box set on CD and the 2012 remixed version are on back order. What? Didn’t anyone think to get ready for tonight’s show? Apparently not.

The good news is that the NBC recording is available on amazon, with John Legend, Sara Bareilles, Brandon Victor Dixon, et al. The production is quite terrific, from the actors and singers to the whole look of the show. What a pleasure to hear live music.

I don’t we ever appreciated John Legend’s voice so much. (His own songs are not this uptempo.) I neve realized he has a texture not unlike Ella Fitzgerald but he can sing rock too! Dixon, of course, and the great Norm Lewis, are Broadway stars. Barielles could get a hit single out of “I Don’t Know How to Love Him.” Back in 1970, Yvonne Elliman sang it on the album (She went onto stardom with the Bee Gees and “Saturday Night Fever”.) Helen Reddy had the hit single. (And PS I have the original box of vinyl, in pristine shape.)