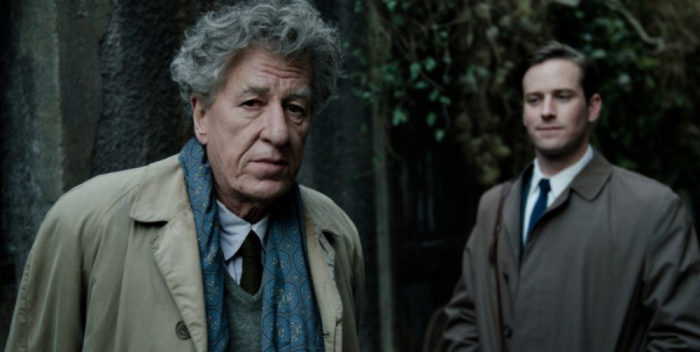 Geoffrey Rush excels at playing tortured always on the edge characters. Rush repeats this talent by playing the artist Alberto Giacometti in Stanley Tucci’s (he wrote and directed) fine but flawed film “Final Portrait,” currently in limited release. Because of the superb acting by the cast, Sony Picture Classics could very well have another early awards film contender.

Armie Hammer plays James Lord, an American bon-vivant writer and art aficionado who in 1964 on a short trip to Paris is asked by his friend Alberto to sit for a portrait. Thinking it will only take a couple of days; Lord realizes the process is seemingly endless. Woven into the Italian/French drama of it all is Giacometti’s marriage, his long suffering wife Annette is played achingly lovingly by Sylvie Testud. Added to that is his love for and of his loyal prostitute mistress Caroline (Clemence Poesy) with his stalwart exasperated brother Diego forever on the sidelines, played touchingly by Tony Shalhoub.

At the recent Pacific Design Center premiere in LA, Armie introduced the film with designer and art lover Tom Ford sitting front and center. The New York premiere at the Guggenheim Museum had Tucci’s “Devil Wears Prada,” co star Meryl Streep and another “Prada” alum and Tucci sister in law Emily Blunt with her husband John Krasinski, (Tucci is married to Emily’s sister Felicity who is expecting their second child.) Tucci pals Blake Lively and Ryan Reynolds also came out to support the talented Tucci.

“Final Portrait” is quiet, patient, thoughtful and at times really funny, with a meditative quality that the engaging actors slip into effortlessly. The bohemian art studio perfectly captures the rag tag mood. What’s missing is more of the backstory on Giacometti’s history which would have added to our understanding of him and his current circumstances. Still though Rush shines as the dramatic and dazzlingly, extremely charming and temperamental and never boring iconic artist.