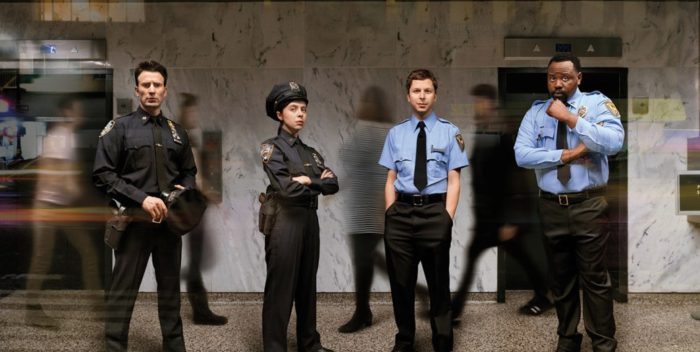 They are each very appealing in the first Broadway production of “Lobby Hero,” but it turns they’re not selling tickets with any super powers. Even though “Lobby Hero” is in the smallest theater you can find on Broadway– the Helen Hayes, now known as the Hayes in case the word Helen is too daunting for millenials–the play did only 52% of its capacity last week. The gross was $333,114– down by $50,000 from the prior week. (Even if you factor in press seats, “Lobby Hero” wasn’t drawing from the previous week either.)

Maybe reviews will help when it opens tonight. Lonergan wrote and directed the excellent “Manchester by the Sea” last year, earning several Oscar nods including Best Actor for Casey Affleck. “Lobby Hero” is from 1999, and has had many productions over the last two decades including one notably off Broadway. This is its Broadway debut, with Cera as Jeff, the slacker security guard in a sort of pedestrian Manhattan building. Brian Tyree-Henry is William, his captain and boss, whose brother has just been arrested in a gang rape and murder.

Enter into this Evans, as a swaggering NYC beat cop named Bill who’s sleeping with a high end prostitute in William and Jeff’s building. Bel Powley, known for “Diary of a Teenage Girl,” is Dawn, the rookie cop assigned to Bill. She’s already slept with him, it’s revealed, and he’s treating her like dirt. In what now seems prescient from 1999, she’s a victim of on the job sexual harassment and, as she notes, rape if she says no to Bill’s advances.

In short order the two stories– of Dawn’s plight and William’s brother’s arrest– dovetail. As they’re hashed out, only Dawn goes through a learning curve. The three guys remain mostly the same throughout. Cera is very comfortable on stage– he’s appeared in other Lonergan productions– and is very winning. Tyree-Henry is a find, providing real gravity as the only character in true conflict. Powley proves winning, finding her way from naif to realist.

Chris Evans is fine. He’s very charismatic although sometimes he seemed like he was in the old “SNL” bit about “Da Bears.” Neither his accent nor Powley’s sounded like they were from New York; I thought for a few minutes that the play was set  in Chicago. Evans is not Andrew Garfield, but he’s got presence and– considering he’s a super hero by day– a nice menacing quality that’s unexpected.

For Tony Awards, “Lobby Hero” may go into competition with “Harry Potter and the Cursed Child” and “Farinelli and the King” for Best Play, but it’s an uphill battle. “Cursed Child” is a spectacle, “Farinelli” is the arty favorite thanks to Mark Rylance. “Lobby Hero” benefits from basic sound construction considering that it’s Lonergan circa 1999. There were and are better plays and movies ahead.