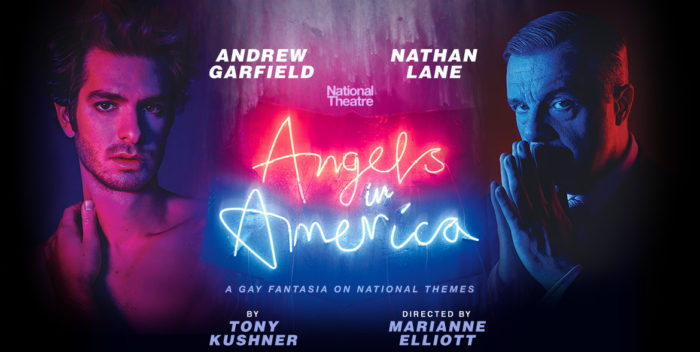 You watch “Angels in America” at the Neil Simon Theater and think– Pulitzer, Nobel, Tony Award who cares? You see now with this revival directed by Marianne Elliott and starring Andrew Garfield and Nathan Lane that Tony Kushner painted his “Guernica.” Well, let’s say he also painted his “Rape of the Sabines” because “Angels” is two plays, so it’s two masterpieces.

Did I like it? “Angels in America” is well beyond liking.

And that’s because a play that premiered in and is set in 1985-86 turns out to be so much more prescient than I recalled or maybe almost anyone in an opening day audience that included Glenn Close (who does the voice overs), Joel Grey, Diane Sawyer, Lea DeLaria, Anna Chlumsky, Oscar winners Frances McDormand and Lupita Nyong’o (separately), Billy Eichner, stage legend Dana Ivey, TV presence extraordinaire Ru Paul and a variety of Broadway producers and tastemakers from the top of the A list.

“Angels” is two plays, as you may know, each over three hours long (with several breaks), directed by George C. Wolfe in 1994. The plays were made into an award winning mini series on HBO by Mike Nichols. The two plays– “Millennium Approaches” and “Perestroika” separately and together are the equivalent of masterful spoken word operas, with interlocking plots, politics, tremendously funny laughs, and deep sorrow all woven together. Now more than ever you see the grandeur of it all, and can only marvel at it. You watch these plays the way you see the pyramids in Egypt and wonder How the heck was this put together? Amazing.

And it’s all the more astonishing because Kushner took on the AIDS epidemic not as a polemic but a saga with characters very richly drawn. He added to those characters Roy Cohn, a real life person who was evil incarnate to Begin with — he sent the Rosenbergs to their deaths, destroyed innocent lives with the Black listing of the 1950s, ruined careers– then denied his own homosexuality as he lay dying from AIDS. He was Richard Nixon’s close cohort, Barbara Walters’s best friend (he was her beard for eons), and was ultimately disbarred on his death bed for stealing from widows.

Time has moved on, a lot of people don’t know about Roy Cohn. A woman waiting for her car with me after the show said she’d never heard of him. She was absolutely my age. So this story has to be told, and Kushner’s genius was not only to put Cohn at the center of the hypocrisy about AIDS but then also to have him hallucinate about Ethel Rosenberg (Al Pacino and Meryl Streep won Emmys playing them in the HBO movie). Roy Cohn was also Donald Trump’s mentor. And this is is key here considering where we were when the play debuted in 1994. Trump is not in the play but his presence now looms over the proceedings like a dark cloud. The anger, the hate, the dismissive behavior– it’s all there. It’s as if Cohn laid out the pattern like a tailor.

Garfield and Lane are the only names in this production, but I’ll tell you– by the time you’re done with three or six hours, this cast are all stars. Lane is Cohn, and we know him, he’s hilarious from “The Producers” and “It’s Only a Play” but really Nathan Lane’s turn as Roy Cohn is something from the beyond. Tony Award? Without a doubt. Lane is so wrenching as this monster (who’s hilarious– and there’s an early inside joke about “La Cage Aux Folles”– remember Nathan starred in the movie version “The Birdcage”–by the denouement of “Perestroika” you are thinking about death in new and disturbing ways. He reaches right into the gut of every single audience member.

Garfield as Prior Walter is the revelation. Even though he won the Olivier Award in London, New York audiences will be lining up around the block to see this extraordinary performance. What Garfield (a movie actor to us with “Hacksaw Ridge” and “Silence”) does here is what establishes an actor forever. He carries the six hours as Pryor Walter becomes infected with the AIDS virus and his world is turned upside down. Garfield is utterly absorbed into this role to the point where you almost can’t imagine anyone else playing it. He’s outrageous, serious, broad, and intense– what a roller coaster.

Ironically, Garfield will be up against Mark Rylance for the Tony (“Farinelli and the King”), whom Garfield reveres. Rylance should be flattered the student will best the teacher this time around. Garfield rises to that high level with this epic.

Kudos to everyone from Elliott– who keeps everyone moving on these phenomenal spare sets– to the entire production. Exhausting! Where you do the two plays in one day as we did today or separate them you can’t do anything but marvel at these people. And most of all Tony Kushner. I don’t care if he never writes anything again. His achievement is ever lasting.

One final note: “Angels in America” is far from depressing. It’s actually a celebration of life. It’s very moving in the least sentimental ways and hilarious in all the best ones.