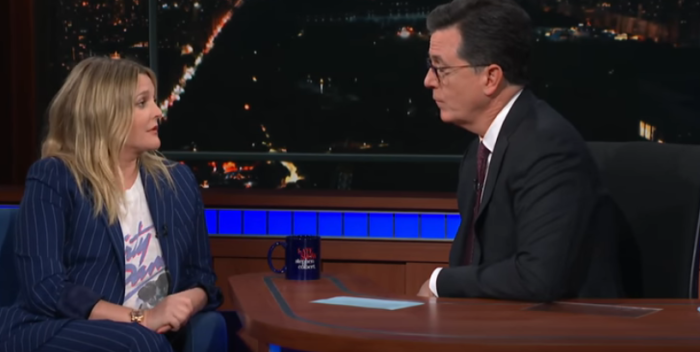 Weird segment on Colbert last night. Drew Barrymore showed up to promote her TV, “The Santa Clarita Diet.” Why weird? Drew is business partners with Colbert rival Jimmy Fallon’s wife Nancy Juvonen in Flower Films (one of the nicest peeps in Hwood). In fact, they’ve produced a bunch of movies together including “Charlie’s Angels” installments, “Music & Lyrics,” and the cult hit “Donnie Darko.” Fallon and Juvonen met when he starred with Barrymore in the 2005 rom com “Fever Pitch.”

But here she is telling Jimmy’s competitor that she’s watched all his shows and “loves” him. Something is wrong. But Drew can be finicky. She is well known for not having a great relationship with her own mother, the terrific Jaid Barrymore. Maybe “The Santa Clarita Diet” only appeals to Colbert, not Fallon fans?