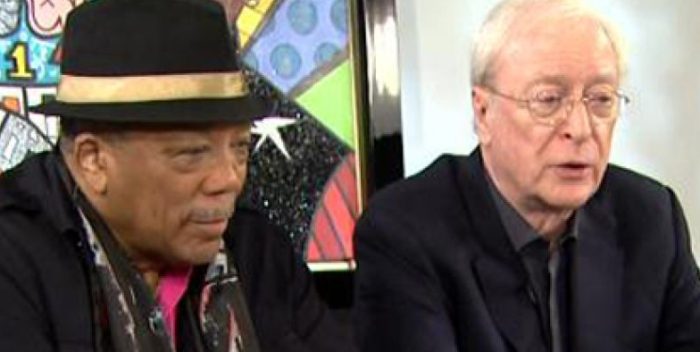 Sir Michael Caine and (Sir) Quincy Jones each turn 85 years young today. They’ve celebrated their birthdays together many times and have been friends for decades. Today is quite an achievement since the two of them have had a lot of fun and never compromised in their art.

I’ve known Michael Caine a while, since he starred in “The Cider House Rules” in 2000. He didn’t think he could win an Oscar, but he deserved it, and he did win. Frankly, he could have won Best Actor but he went into the Supporting category. He was a pleasure to have around that Oscar season, and has never failed to be quite the gent, smart and funny.

Caine’s other Oscar came in 1987, for Woody Allen’s “Hannah and Her Sisters.” He’s the only man Woody has ever directed to an Oscar other than Woody himself. All of Allen’s other Oscar nominees and winners are women. Caine has four other Oscar nominations as well. PS He and Roger Moore were great pals. They were often in Elaine’s, and one year they took our beloved Elaine Kaufman to the Deauville Film Festival.

Quincy Jones, who you know is called “Q,” is a genius musician and humanitarian. Forget about that dust up last month and those crazy quotes. The fact is, Q is a jazz prodigy who conducted for Frank Sinatra during the Chairman’s heyday, arranged his music and helped bring him back. Q has recorded dozens of hits, worked with everyone, influenced countless musicians of different genres, and shaped Michael Jackson’s “Thriller” and “Bad” into timeless blockbusters.

Q has a pair of headphones he sells through AKG (Harman, JBL). They’re listed at $1,499 but I think you can pick them up on amazon for half off. They’re called the N90Q and have this space age equalizing thing in them. They are worth the price. I recently got a “revised” pair to play with– and all I did was listen to Q’s jazz work through them. The sounds are magnificent, soaring, soulful. Transportive. Transplendent. Magnificato. You want to make up words for how his music makes you feel.

You know, everything about Quincy is real. There’s no artifice. He’s the real deal. He says wild things, they are mostly true, or true enough. He’s telling it like it is. We’d better appreciate him while we can.