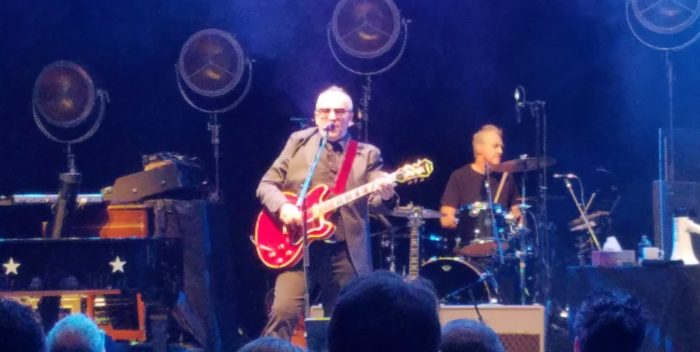 I guess we have Steve Wynn’s bad behavior to thank for Elvis Costello’s finale last night at the Capitol Theater in Port Chester, New York last of three sold out performances this week.

Elvis and the Imposters (really the Attractions Steve Nieve, Pete Thomas, plus newcomer– 2001– Davey Farragher) put on a raw and rocking show at the Capitol, sort of amazing some 41 years Costello’s debut as the angriest young man of New Wave rock.

But the group cancelled their shows at the Wynn Las Vegas’s Encore Theater back in early February after Wynn was accused of various #MeToo allegations. A source with the group confirmed that to me last night after they rocked the Capitol like it was 1977 all over again. 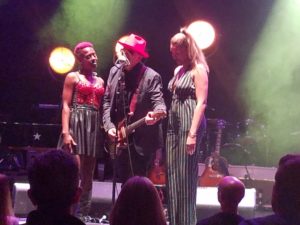 Costello will be 64 in August, which seems impossible since we just celebrated his 45th birthday with the song “45.” (Was that 19 years ago?) I first saw him in 1977 and 1978 as “My Aim is True” and “This Year’s Model” plus a variety of singles and special appearances on Stiff Records (along with Nick Lowe, Dave Edmunds, Lene Lovich, Jona Lewie et al) upset the apple cart of my music life (Blondie, Ramones, Talking Heads) and off we went. I’m three years younger than Costello, but if anyone asks I’ll be 42 this spring.

Anyway, Costello has never let rust sleep. Dozens of albums, career fluctuations, music ranging from jazz to country, opera, R&B, classical, opera later, here we are at the Capitol four decades later. Costello’s hair line has receded (mine has just disappeared), and he is pumping out “Pump it Up” with a ferocity that Crestor does not recommend. Many of the songs last night came from “My Aim is True” (the set changes constantly because they have so many choices). They have not been slowed down (which is what happens to rock bands over time). And even though the audience was gray, the performers were as colorful and blisteringly live as ever.

Thomas is killing the drums (which he’s done since “This Year’s Model”), Faragher thumping that bass, only better, deeper, richer. Steve Nieve (he and Thomas have been there since ’78) remains a piano virtuoso. Costello’s attack on “Veronica” with Nieve transcended, elevated, seared. There were some nice surprises including “Girls Talk” (a cover hit for Dave Edmunds in 1979, the last good year for music), and the erudite “This is Hell” (a personal favorite– I hum it a lot), a cover of “Baby It’s You” (a signature for Costello, Edmunds and Lowe at all times). Costello– who came in on power pop eschewing long solos, shredded his guitar to our great satisfaction.

There was newer stuff as well. I’m particularly fond of “You Shouldn’t Look at Me That Way,” which Costello wrote and recorded for last year’s “Film Stars Don’t Die in Liverpool.” Plus we were were treated to two number from Costello’s Broadway musical in the making of the film “A Face in the Crowd”– the title song and “Blood & Hot Sauce,” each of which is captivating.