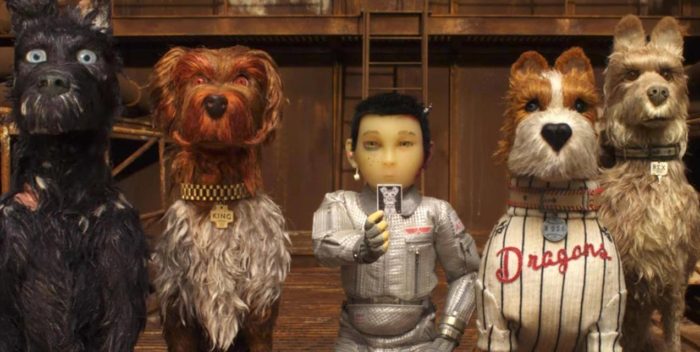 “Isle Of Dogs,” say it fast and yes, it does sound like “I love dogs.” That’s what the brilliant filmmaker Wes Anderson goes for and beyond delivers on. Anderson has delved into stop motion animation before with his “Fantastic Mr. Fox,” but this time Anderson hits a canine grand slam with this latest wacky and whimsical, singularly unique and delightful film.

Written by Anderson, Roman Coppola, Jason Schwartzman and Kunichi Nomura, “Isle” has been years in the making and is an ode to the director’s love of Japanese cinema. This doggie saga is set in futuristic Japan where a dog flu epidemic in the fictional city of Megaski which turns man’s best friend into his worst enemy. The evil mayor (voiced by Nomura) banishes all dogs to ‘Trash Island,’ where they are forced to live among the rubbish. It’s there that we meet the five main dog characters, Rex (Edward Norton), Duke, (Jeff Goldblum), Boss (Bill Murray), King (Bob Balaban) and the de-facto leader and tough as nails stray Chief (Bryan Cranston) who warns all, “I bite.”

The evil mayor’s innocent ward Atari (Koyu Rankin), searches for his beloved pooch and winds up on the putrid island. Add to that, Scarlett Johansson’s gorgeous show dog, human activist (Greta Gerwig) plus a scene stealing oracle pug (Tilda Swinton) and might be a cannibal aboriginal dog (Harvey Keitel) as well as Liev Schrieber, Courtney B. Vance and even Yoko Ono; well the casting is just perfect. The dogs take on human characteristics, which makes them off the chart adorable and funny, clever and sarcastic and wholly appealing.

Oscar winner composer Alexandre Desplat, who just won the award for “The Shape Of Water,” as well for Anderson’s “The Grand Budapest Hotel,” composes his music magic once again. The themes of desperation, sadness and despotism are discussed throughout the film, which makes this story genuinely poignant. Kids will appreciate the animation and wackiness of it all because Anderson wisely does not foray into too cutesiness territory. He always tows the line so that adults will be drawn to the droll sly humor and mega charm of this truly technical and artistic marvel.

“Isle of Dogs” opens in limited release on March 23rd.