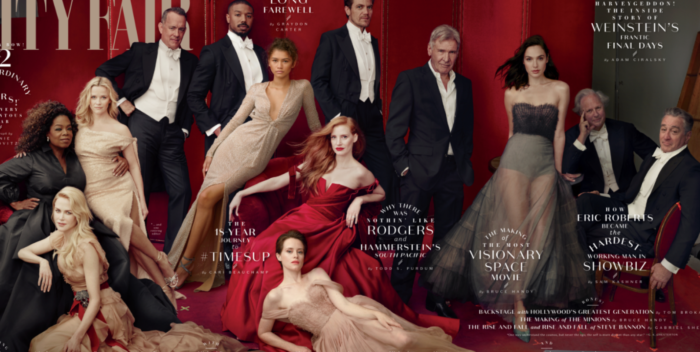 Once upon a time. the Vanity Fair Oscar party was “the” place to be after the Academy Awards.

It’s where Ellen Degeneres met Anne Heche. It’s where Monica Lewinsky made her debut after the Clinton scandal. Old Hollywood mixed with new.

Graydon Carter, you see, had that sensibility. He took from Swifty Lazar and Dani Janssen, who knew the players. The Vanity Fair was so good up til last year that Elton John would come on over after his party peaked. (Not so this year, btw.)

Last year, there were all kinds of cool interesting guests apart from the Oscar nominees. I walked in with Mariah Carey and Pharrell (they weren’t together), Justin Timberlake was hanging out, LA Reid and Smokey Robinson had a whole corner.

The year before, it was Jamie Foxx and Leonardo DiCaprio and whole gangs of the curious. Mick Jagger was a regular. There was frisson.

Alas, the party is over. The guest list read like the Indie Spirit Awards meets a trip to Target in Beverly Hills. A bunch of people didn’t show or weren’t invited, from French artist JR and Agnes Varda (nominated for Best Doc– I heard they weren’t invited) to Barbara Davis, the city’s most beloved philanthropist.

If there were hot people in town, they gave their own parties. Jay Z rented out the garage at Chateau Marmont and invited 300 friends including, presumably, Beyonce and maybe even Solange. Quincy Jones went there and held court. Big black screens covered the entrances to the garage so even hotel guests couldn’t see who was coming or going. The music pounded like it was an express train rocking through a local station.  Extra security– big beefy guys with ear pieces– were stationed in even the strangest places.

Meanwhile, Madonna and manager Guy Oseary had their bash. This would explain where people Jennifer Lawrence and Emma Stone would have been (but not Warren Beatty– not at Madonna’s).

But back to Vanity Fair. The list of actors on the tip sheet read more like In Touch or TV Guide than…Vanity Fair.

It’s the end of an era maybe. I hope not. But we may have reached a generational change and there’s no going back.

Graydon’s Oscar party and sensibility was Old Guard- it came from Swifty Lazar and the original Spago-Ma Maison-Le Dome era. But almost every one is dead, or they’ve gone home. And no one at Vanity Fair has any kind of spiritual connection to the Old Guard– who would romanticize it now?