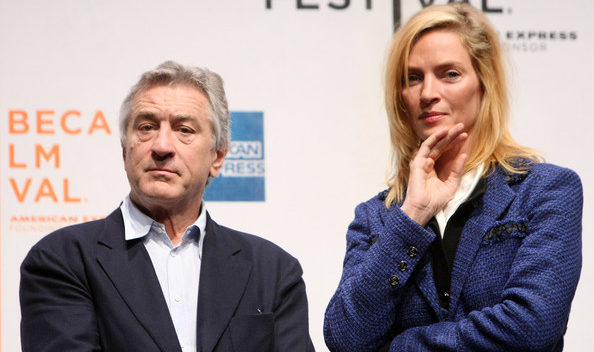 EXCLUSIVE It’s been turmoil all weekend for The Weinstein Company — well, turmoil for a long time, like since October 5, 2017 when all hell started breaking loose.

This weekend the board– whoever’s still on the board– fired COO David Glasser, who knows where all the bodies are buried. That’s what concerned the NY State AG Eric Schneiderman since Glasser was negotiating two ends to the middle– he was planning to run the new company TWC would become once it was sold.

But maybe the AG’s office didn’t realize that one of the three movies TWC still can call an unreleased asset is actually produced by Glasser’s brother, Philip. That’s “The War with Grandpa” which stars Robert DeNiro and– are you ready?– Uma Thurman. It was made last year, not in 1994. Last year.

Uma Thurman? She hates The Weinstein Company, right? Ms. Thurman didn’t mention to Maureen Dowd in their New York Times Opinion piece that she hated Harvey Weinstein so much she was starring in one of his new big productions. Seems like it escaped everyone’s attention. Thurman, who turned redder than the red carpet last October when asked about Weinstein, is still on his payroll. I do not get this. Uma Thurman is a BIG star. She’s headlining on Broadway right now. She could work with anyone. So how did she wind up back at the Weinstein Company?

But then again, how is the Chief Operating Officer’s brother producing “The War with Grandpa”? It’s a Robert DeNiro movie. Philip Glasser has 8 prior producer credits, all movies no one’s ever heard of even in Wakanda, starring people so anonymous they could be on milk cartons and never get rescued. Surprisingly, the Glassers’ father, Richard Glasser, is not the music supervisor on “Grandpa.” That’s odd, because he’s been on the TWC payroll since around 2009 when David joined the company.

Sunday’s LA Times story mentions some of the lawsuits David Glasser has been in before and during his time at TWC. But the Times didn’t get that all three Glassers– David, brother Philip and father Richard– were sued by a man named Jeffrey Cooper who wanted his $500,000 back after investing in the Glasser family’s movie production company– a company that existed while David was already working for the Weinsteins and his father was the company’s music supervisor.

The other MIA Weinstein movies are Garth Davis’s “Mary Magdalene,” starring Rooney Mara, which is going into international release in time for Easter; and “The Upside,” the American remake of “The Intouchables” by Neil Berger, with Bryan Cranston, Kevin Hart and Nicole Kidman, which played great in Toronto and is now in limbo.

There are a lot of plot holes in everyone’s stories, I’d say. Can’t wait to see them get filled in.