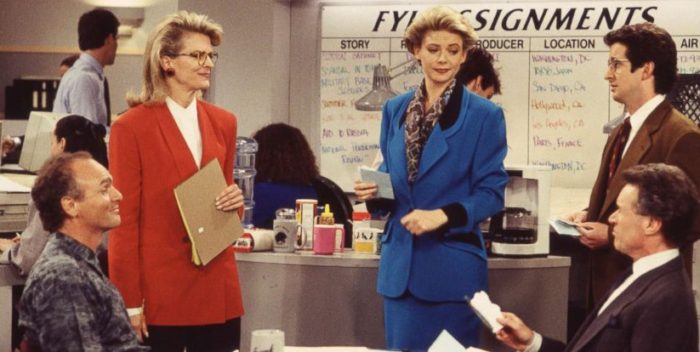 OK, good news. When the word went out that “Murphy Brown” was coming back, you may recall I said the show should be about Murphy’s son, Avery, all grown up and following in mom’s footsteps.

The father of Avery was Jake Lowenstein, a former Underground leftist radical, played by Robin Thomas (real name: Grossman). So that means that he’s really Avery Lowenstein. But Murphy and Jake never married. It’s unclear if Thomas– who was ubiquitous for a while on TV but is also a sculptor and artist– will return as well.

Avery is now 28, described as handsome and effortlessly cool, with his mother’s competitive spirit and father’s passion for adventure. My guess is they’ll go for a name actor in that age range with comedic background. (The producers should look for a guy named Robert Watkins, just dropped from “General Hospital. He’d look the part.)

Other new “Murphy Brown” characters will include the widow of Phil (the Pat Corley) who owned the bar where the FYI gang hung out, and a young guy who’ll be in charge of social media.

Now all they have to do is bring back Wally Shawn as Stuart Best, my all time favorite “Murphy Brown” character and they’re all set.

PS You may not remember this, but at one point Jim left FYI and went to work for the Wolf Network. It was a hilarious send up of Fox News. Diane English must revive this part of the show. Maybe Chris Rich could play a Wolf Network buffoon a la Hannity or O’Reilly.