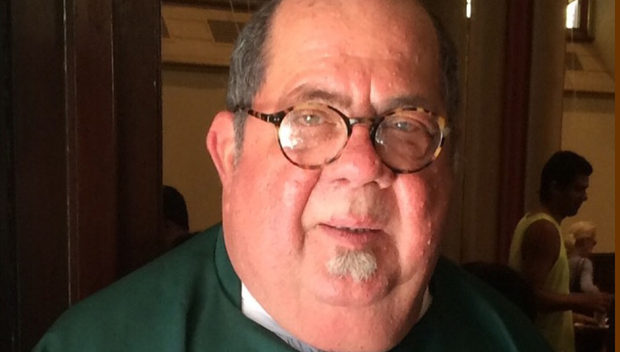 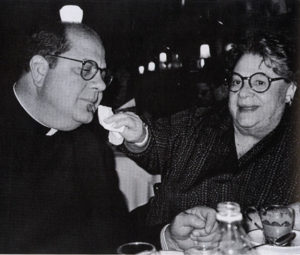 The absolutely legendary Father Pete Colapietro has died at age 69. He was the patron saint of Elaine’s. His favorite saying was: “She took my heart and half my liver.”

Larger than life with the biggest heart ever, Father Pete is the subject of a beautiful obit by James Barron in the New York Times tonight. But what you really don’t get is how all of us knew Father Pete, who was assigned to two different churches in Times Square. All the actors knew him. And loved him.

Well, everyone loved him. I have a lot of favorite Father Pete moments. But the best were when he sang in Elaine’s. (This, of course, was when Paul Sorvino wasn’t singing.) Father Pete liked to sing – rather — perform– “Mack the Knife”– the original Brecht and Weill, in German. His mostly bald head turned red, water beaded up on him, and it was like he acted out the entire Threepenny Opera with such passion and commitment. Bravo!

Elaine Kaufman was Jewish. Very Jewish. And Father Pete was Catholic. But they would talk for hours, and Elaine loved him like a brother. I once said to her who do you want to talk at your funeral? “Pete, of course,” Elaine said. They had transcended religious backgrounds. (Elaine wasn’t accorded a proper funeral, but that’s a story for the book…)

It’s hard to imagine Pete was only 69. He didn’t look old– he was huge, 6’3″ well over 300 pounds– but he was an old soul. I will really, really miss him. But wait til that funeral. Talk about “parties of the century.”