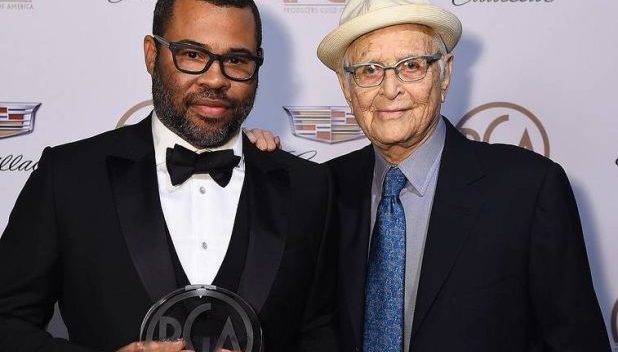 PGA presidents Lori McCreary and Gary Lucchesi started the night with a call to end sexual harassment. McCreary noted, “One of our greatest duty as Producers is to protect the teams working with us.”  They went on to talk about the PGA’s new anti-sexual harassment guidelines.  Tracee Ellis then presented the Animated award to “Coco’s” producer Darla. K. Anderson.

Judd Apatow followed her to give the aforementioned award to Donna Langley.  He glibly recited a list of celebs that passed on giving her the award.  “Meryl Streep just dropped out.  Why?  Because she’s pissed at something.  Angelina Jolie said to get lost.  Mel Gibson said no and Kevin Spacey said he wasn’t available.  Even Ted the teddy bear said to fuck off.”  Judd then explained his affection for Donna.  “We’ve made 10 movies together over the last 15 years.  She doesn’t have childhood wounds that she takes out on you.”  Judd ended with: “In 2017, Universal films grossed over 5 billion dollars.  So I don’t understand what Meryl is pissed about.  She should have come.”   Langley quipped back, “Judd has learned a lot from me.  Being English you know, “Faulty Towers, “  “Monty Python.” Judd, you’re welcome.”

“The Big Sick’s” Kumail Nanjiani then spoke about how he wanted his film to be titled, “Guess How’s Coma to Dinner, “ or “Pakistani Hall,” which were wisely shot down by the Producers.  A clip from that film followed by Timothee Chalamet introducing a clip of his “Call Me By Your Name.”

Leah Remini accepted the next award for Non-Fiction Television for her “Scientology and the Aftermath,” series on A & E.   She noted, “I never imagined the impact of those who raise their voices against the Goliath which is Scientology.  An organization that uses its power and its money to intimidate. The days of abuse are going to be finally in the past.  This is a good start.”

Norman Lear, who got the biggest ovation of the night, came out to present the Stanley Kramer Award to a film he’s seen three times “Get Out.”  He explained, “The movie itself is terrifying.  The gift of Jordan Peele’s film is about the terror of being black in America. Watching it has been a rare experience in my life.” Lear, who’s busier than ever, called Kramer his hero and said, “At 95, I feel like I’m at the apex of another lifetime.  I can’t fucking believe it.”

Peele then came on and paid respect to the activist Kramer.  “There would be no “Get Out,” without “Guess Who’s Coming to Dinner.”  He then went on about Lear using his famous comic chops.  “I’m proud to call you my friend.  You can use my body for your brain anytime. He’s the only person in the I would coagulate with.” Then commenting on the unexpected mega success of his film he said, “This is so fucking surreal.  If I had a nickel for every time a white person came up to me and said, ‘if only I could have voted for Obama a third time. ”  He then switched gears and referenced ‘the sunken place’ in the film.   Peele said, “ The sunken place is the system that silences the voice of women, minorities, of the other people.  The sunken place is the President who calls athletes sons of bitches for expressing their beliefs on the field, and the homeland of our most beautiful immigrants, shitholes.  With this racist in the White House, every day there is proof that are in the sunken place.”

Netflix’s widely popular “Black Mirror” took home the award for Long-Form Television, winning over the favored HBO’s “Big Little Lies.”  One of “Lie’s” stars, Reese Witherspoon then presented the Visionary award to her upcoming “Wrinkle In Time,” director Ava DuVernay.  “This times will be remembered for the way we work the people we choose to see, we need to pivot from prejudice.  Diversity is not just a good thing to do; it’s an absolute must. “

HBO then had a win with “Last Week Tonight with John Oliver,” presenter Frankie Shaw from “Smilf,” accepted for them.

After a couple of awards including the deserved Brett Morgen’s National Geographic’s documentary, “Jane,” and Amazon’s terrific “The Marvelous Mrs. Maisel,”  “Wonder Woman’s” Patty Jenkins presented the respected WW producer Charles, ‘Chuck,’ Roven with his honorary David O. Selznick Achievement Award in Theatrical Motion Pictures.  Roven quipped, “I’ve had many great experiences in this room, starting with my Bar Mitzvah.  I literally became a man her on this stage.  I just might read from the Torah tonight.”  Roven noted that he started his career, as “a surf extra on Hawaii Five O. “ He then spoke about his late wife executive Dawn Steel.  “She was one of the first women to run a major studio.  She dedicated her career to lifting other women up through the ranks.”

Tom Hanks then introduced “The Post” clip noting that cell phones did not exist at that time.  Hanks couldn’t help but quip, “When was the last time you saw a fucking dial pay phone?”

The talented Brian D’Arcy James intro’d a clip from his “Molly’s Game.”  Then Gwyneth Paltrow (who got a muted reception from the crowd) gave the Norman Lear Award to the final honoree of the night Ryan Murphy.  Ryan explained that Norman had been a champion of his early on with a phone call, “ I see you, keep doing what’ you’re doing. Don’t give up. And I didn’t, and that’s because of Norman.”

“The Handmaids Tale” won, with star Elisabeth Moss joining the others on stage.  And for the final award which got a rousing reception, “The Shape of Water.”  Producer J. Miles Dale and co-star Richard Jenkins accepted for Guillermo del Toro who is at his ailing father’s bedside in Mexico.  Jenkins poignantly read his statement. “I’m sorry I couldn’t be there. Tonight I stand by the side of my father’s bed in my hometown in Mexico. I would like to ask of you all to allow me then to dedicate a little moment and the honors of this night to both my father and my mother, to whom my infinite gratitude belongs and in turn as a father to offer to my kids also, may they be free to pursue their dreams and fantasies and may they stand by my side when I fade away.”