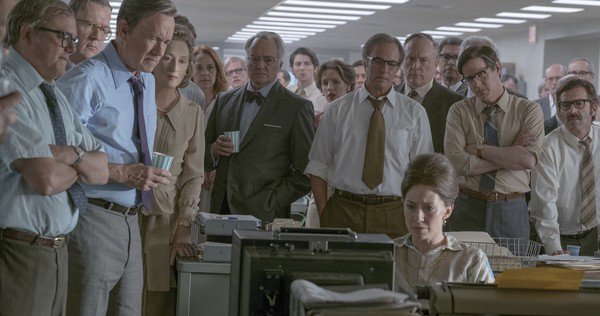 It was without a doubt a brilliant and daring undertaking. In light of Donald Trump’s flagrant disregard for a free press, Steven Spielberg decided to address the problem quickly and head on. He would take two of Hollywood’s top tier stars and make a  movie about how Richard Nixon tried to block publication of The Pentagon Papers. The parallels were too good, and the moment was exactly right. And he completed the project — which received rave reviews– in less than five months.

But now. 19 days after release, the fate of “The Post” depends on tonight’s Critics Choice Awards. Fox has kept “The Post” in limited release and depended on reviews to make $4 million in 36 theaters. To go wide, “The Post” is waiting for awards to trumpet its importance and urgency.

But the movie struck out at the Golden Globes last Sunday. And it received no Best Ensemble nomination from the Screen Actors Guild. Today, the Directors Guild overlooked Spielberg. The only citations it’s received are from the National Board of Review, which gave it Best Picture, Actor (Tom Hanks) and Actress (Meryl Streep).  But the NBR is like your grandma saying your kid is really smart. That won’t get you into college.

If the Broadcast Critics, who vote the Critics Choice Awards (CW Network, 8pm Eastern) don’t give “The Post” some kind of help tonight, Fox has a problem. And it’s vexing because “The Post” should be the Best Film– it’s the Big Idea movie and tells an important piece of history. It’s also extremely entertaining. Its competitors are worthy but with caveats:  “Three Billboards” has divided loyalties. “Shape of Water” is a fantasy. Some of the others are small gems. Only “Dunkirk” equals “The Post” in scope.