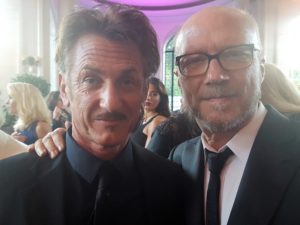 I am very sad to learn that Oscar winning director and writer Paul Haggis has resigned from the important charity he started, Artists for Peace and Justice.

Paul, who won two Oscars for “Crash” and was nominated for writing “Million Dollar Baby,” literally willed APJ into existence before the devastating 2010 Haiti earthquake. Prior to the quake he’d already been raising money and enlisting celebrity friends to help one of the poorest nations in the world. But once the quake hit, Haggis went into overdrive. He’s raised millions of dollars for rebuilding, for education, etc. In the last couple of years he’s even joined forces with Sean Penn and his Haiti charity to make a difference in the impoverished country.

Now because of accusations of sexual misconduct that are unfounded and unproven, Haggis has stepped away from APJ. This is tragic.  His first accuser apparently demanded $9 million to keep quiet, so Haggis went to the US Attorney because he was being extorted. The follow up accusers haven’t asked for anything nor made actual accusations– they’ve just waved the magic wand of social media to brand Haggis.

The accusers– particularly the secondary ones– could easily be attached to Scientology. Haggis, a former member of the cult religion, broke free a few years ago and has been a constant public critic of the notoriously vengeful group. Haggis was the main source for Lawrence Wright’s book “Going Clear” and the documentary of the same name by Alex Gibney. It’s not out of the question that Scientology has plotted against him.

Haggis has a lot of lady friends, including his ex wife, who are steadfastly behind him. Unlike some other recent alleged misconducters, Haggis is not the guy who everyone said, “Oh yeah, sure.” Quite the contrary. Something is wrong here the shame of it is that before it’s straightened out a lot of damage will be done– not only to Haggis but to the people of Haiti who depend on his dedication and unwavering loyalty.