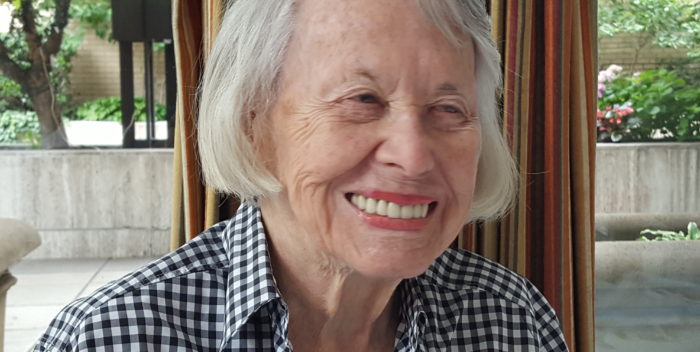 Today’s NY Times Magazine honors great people who passed away in 2017. It’s a lovely issue (particularly the Mary Tyler Moore piece). But there’s no mention of Liz Smith, who was more important to New York than any of the others.

So here’s a re-post of the two pieces I wrote when Liz passed away in early November. What a life she lived!

Liz Smith, the great gossip columnist and writer, my friend and in a sense mentor of any columns I’ve written since the 1980s, was a champion of literacy, a bon vivant, swell old Texas girl and a great person. Sure, there were people she crossed swords and paths with, but it didn’t matter. If you knew Liz, if she was your friend, she was loyal as the day was long.

When someone is 94 it should be enough. But you know, there have been so many phone calls and lunches over the years, so many margharitas and laughs — it’s never enough. COndolences to her family– the family she chose– Iris Love, Cynthia McFadden, Cynthia’s son Spencer who had such a loving relationship with her. Denis Ferrara, stalwart who has written her column for years with her input, Liz’s old assistant Mary Jo, as well as Diane Judge.

Liz was gay, she wrote about it in her memoir, Natural Blonde. But did you know she was married? Twice? The second husband, she told us once, just disappeared. “Honey he got on a train to Long Island and we never saw him again,” she said. She had to have him declared dead.

Liz bounced between the New York Daily News and the New York Post with her column over a 30 year run. She also wrote for New York Newsday, syndicated by the LA Times. She was the first gossip columnnist to get a million dollars a year. She deserved it.

In the early 80s, when I was a book publicist, I sneaked into her Daily News column through Harry Haun, who was filling in for her. Shortly thereafter Liz started taking my items. We got friendly even though her attack dog assistant of the time, Saint Clair Pugh, barely let me speak to her. I also became great friends with her item planter, Mike Hall, a legend who’d worked for Walter Winchell.

You know Liz coined the phrase, “Gossip is just news running ahead of itself in a red satin dress.” Donald Trump once tried to get her fired from the Daily News. It didn’t work. She’s had the last laugh on everyone. We stand, applauding.

Liz had her favorite celebs, and her good word carried a lot of importance in their careers. It’s hard to imagine now, but Liz at her zenith, at her apex, was like the Word of God. If you could “get into Liz Smith” you had it made. Not only did everyone in New York and Hollywood wait for her every sentence, but she was also syndicated to hundreds of newspapers. There was no internet, no social media, there was barely even cable TV. What Liz said mattered in a huge way.

The biggest beneficiaries of Liz’s largesse started with Barbara Walters. The truth is, Liz made Barbara’s career. She touted her constantly. If only there were a way to go back and digitize Liz’s columns to see how often she supported Barbara and ballyhooed her. From Barbara on Today, to her debacle with Harry Reasoner, to all her ABC specials and so on. Liz treated Barbara like gold. Sadly, when Liz lost her column in the New York Post she felt Barbara cast her aside. It was mostly true.

Liz also loved the actress Elaine Stritch. More mentions than any other actress, I think, although Holland Taylor was a great pal and always got love from Liz. Director Joel Schumacher–even Joel was shocked how much Liz promoted his films. But they were great friends, and in return Liz got great scoops about Joel’s films, Joel Silver’s films, Warner Bros releases, etc.

Mike Wallace– Liz was once his assistant. It was almost her first job in New York, booking guests for Mike’s radio show in 1953. Shortly after she’d mastered that job she headed to NBC and the very early “Today” show. Everyone she met became a lifelong friend and it kept them all in good stead. As Mike soared through CBS News, his adventures became chronicled in Liz’s columns. The advent of “60 Minutes” in the late 60s came at a perfect time– Liz’s rise as a columnist and freelance writer. The stars were aligned.

A lot of Liz’s passions about celebrities came from her associates. Diane Judge loved theater, wrote about it, so naturally Liz embraced it. The Theater Wing should lower the lights on Broadway this week. There wasn’t a new show that Diane and Liz didn’t promote or even save. There were a lot of rescue missions especially for shows Clive Barnes panned in the Times. The Liz Smith column plug could buy a show extra time.

Denis Ferrara loved Marilyn Monroe and Madonna. They each got a lot of coverage in the Liz Smith column over the years. Denis was smart to be right on the cutting edge with Madonna– she should send him bouquets of flowers, Champagne and cash, frankly. Denis also had a keen sense of nostalgia for the great Hollywood icons. He wove them into Liz’s columns, giving it a sense of history even as they were breaking stories about the Trumps, or the Murdochs or whomever.

And how about Rupert Murdoch? Liz was loyal to him. When his first wife, Anna, started writing bad novels, Liz plugged them over and over. It was partly because he was the boss, and partly because they were all on the same team. She fawned over Anna. Later when the loutish hard drinking Col Allan decided he wanted to get rid of Liz, Rupert just rolled over. So here’s a shock: when it happened, Roger Ailes put her on his payroll as a contributor. And she was on until he died.

So many people owe their careers to Liz, it’s kind of mind blowing. She knew how to make an actor into a star into a celebrity. And as they got bigger it gave her something to write about– and exclusives. (No one knows the grind of a daily column.) She knew the give and take to keep everyone in business for another day. In that sense, I learned so much from her. Liz played the long game, and that’s why she lasted for decades.

Right now, please pour some whiskey, some Tequila, raise a glass to Liz. She was simply the best. There will never be anyone like her again.