We were in full Oscar swing this week with screenings, receptions, meet and greets, reunions. Pre-nomination time is like a big wedding with ten different families. You must learn everyone’s names and relationships, remember who’s in what movie or multiple movies– which can be very disturbing even if you’re just drinking water.

The multiple movie guy this year is Michael Stuhlbarg. He was the star of the Coen Brothers’ “A Serious Man” a few years ago. He’s become the one of the most valued character actors in Hollywood. He’s like a throwback to real acting– amazing.

Stuhlbarg this year is featured in “Call Me By Your Name,” “The Shape of Water,” and “The Post.” All three will be nominated for Best Picture, so I’m hoping Michael will give me one of his Oscar seats! He can’t be nominated from all three, but it’s generally acknowledged he’s a shoo in for “Call Me,” in which he plays the most understanding parent in the world. The speech he gives at the end of the movie is something to behold. 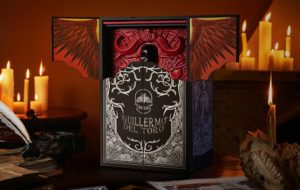 Stuhlbarg was one of the guests Thursday night at a Fox Searchlight  reception for what seemed like everything but was supposed to be about Guillermo del Toro’s “The Shape of Water.” To slick things along, del Toro brought bottles of the tequila Patron makes for him and sells for $400 in an extraordinary box. They had plain and orange flavored; I had the former, which killed my toothache (long story) and cleared my head enough to greet Frances McDormand, who’ll be up for an Oscar herself from “Three Billboards from Ebbing, Missouri.”

I thought it was the tequila, but Frances McDormand was smiling at me. Usually she does not like compliments. I said, “You’re really great in that movie.” She responded, smiling, “I’m going to accept that compliment! Thank you!” Maybe she had had the tequila, too. del Toro may be on to something. The man from Patron later showed us the whole box– a “shrine” as it were, to del Toro and Tequila. Alas, we couldn’t fit it under our coats entre nous. But another shot glass-worth and I understood the whole concept of “The Shape of Water,” an extraordinary film in which Sally Hawkins mates with a sea creature. (We met him, too, an actor named Doug Jones. He is not running against Roy Moore.)

Earlier in the day, Jessica Chastain time traveled from Tokyo to Le Grenouille on East 52nd St. to talk about Aaron Sorkin’s film, “Molly’s Game.” She may have used a device left over from her time in Christopher Nolan’s “Interstellar.” Literally, she was in Japan and the next day she was at lunch with us. She told us that Sorkin originally handed her a 205 page script (most scripts are at max 120 pages). “I read it and he said, no no I’ve shortened it and sent me a new script. It was two hundred and three pages. I said, Aaron, it’s not a lot different.”

The final script was around 170 pages, but Chastain– who is sensational as real life poker mistress Molly Bloom– says, a Sorkin script has so much narration while other things are going on, that that may account for the length. She says all those words, too.

Meantime, Christopher Nolan himself, wife producer wife Emma Thomas, let a bunch of people watch “Dunkirk” on IMax this week, then met the crowd for lunch at Lincoln restaurant and a Q&A. I think the crowd was dazed by the “Dunkirk” genius–this is what you get Best Picture for. Ask David Lean. Mark Rylance, who should be nominated for Best Supporting Actor, couldn’t come because he was rehearsing a play. But Nolan and Thomas were quite enough.

Everyone had questions including director Barry Levinson, Candice Bergen, and so on. The honorable George S. Stevens Jr., whose famous father made historic World War II documentaries, moderated the panel discussion. There was a lot of talk about camera size, weight and film grain. “Dunkirk” is a masterpiece. One thing I learned was that Nolan is obsessed with Terrence Malick’s “Thin Red Line,” and has watched it over and over.

“I think he’s more poetic than me,” Nolan said, but no one agreed with him. “Dunkirk” is like a tone poem filmed by Malick starring Kurt Vonnegut’s Billy Pilgrim as a time traveler. And that is no mean feat!