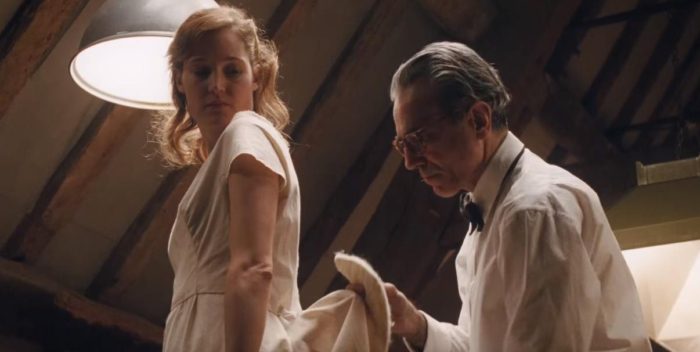 At one of the first screenings of Focus’s “Phantom Thread” in LA on Friday, director Paul Thomas Anderson was asked how he feels each time he starts a new movie.  The six time Oscar nominee surprisingly answered, “it’s always good to feel like an amateur.  You have to pretend you have confidence, but the first day it all goes belly up anyway.

“Phantom Thread” stars the sublime Daniel-Day Lewis as Reynolds Woodcock,  a respected and most prickly fashion designer whose world does indeed go belly up by the arrival of first demure then not so much waitress/turned model/muse Alma, played wonderfully by Vicky Krieps.  The always terrific Lesley Manville plays Reynold’s stalwart, tough and loyal sister Cyril.

DDL, who has three Oscars, has said this is his last acting job. “Phantom Thread” could be his fourth. (It will likely garner a nomination — no surprise there.)

Did this world come as easy to Anderson as the others he wrote about?  Anderson quipped, “well for ‘Boogie Nights,’ it was about porn and of course that came naturally to me.” Then he added,  “for ‘There Will Be Blood,’ it was about oil and being from California I knew something about that.  But this one it was distant.  I love England and the people, the culture. The story of couture in that time, and the fairy tale that it is could only be told in Paris or London so I chose London.  Plus they have the greatest actors there.”

Anderson’s close friend Daniel Day Lewis was also a collaborator with him in developing and writing this film.  “He had gigantic input,” Anderson explains, “He did an enormous amount of research.  He learned how to sew; he got pretty close to making 100 buttonholes.” (DDL fans will recall the actor once took off a year to be a cobbler’s apprentice in Florence, Italy.)

Lesley Manville was Thomas’s first choice in the role.  “He called me during the week and then we were to meet that Monday.”  She continued,  “I have watched all his movies but wanted to again. So I went on Amazon Prime and ordered them all. I made a pot of tea and watched them all again.” Did the actors every really meet the real Day Lewis who is known for staying in character during every film he shoots?  “Not really,” said Lesley.  “We are just starting to do a lot of press so hopefully we will then. “

“Phantom Thread” opens Dec 25th.  And what got equal applause from the crowd was that Anderson dedicated the film to his close friend, the late filmmaker Jonathan Demme.  Classy move.