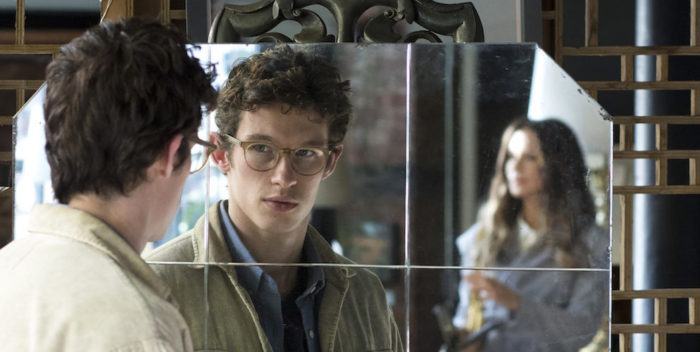 In “Baby Driver,” the whole  musical pay off to the film is Simon & Garfunkel’s title song at the end. Not so in the other movie this summer named for one of their tunes. You only hear a nanosecond of the “The Only Living Boy in New York” on this movie’s soundtrack. Oh well, maybe they couldn’t afford more.

The title refers to a book about a young man, Thomas Webb (Callum Turner) coming of age in New York, discovering his manhood. It helps that he is surrounded by beautiful women, a girlfriend Mimi (Kiersey Clemons) who, wanting to stay friends after one hot night, is as much adrift as he is but will go to Croatia, a mysterious woman (Kate Beckinsale) he stalks, and his mother Judith (Cynthia Nixon) whose oxygen comes from giving dinner parties. In one clever scene, she presides over the table with a rogue’s gallery of New Yorkers: Ahn Duong, Debi Mazur, Tate Donovan, Wallace Shawn, types who make you ask, why wasn’t I invited?

Two prominent men figure in this story, his father Ethan Webb (Pierce Brosnan) who works in publishing, and an eccentric neighbor (Jeff Bridges) who stands in as a father figure, doling out sage advice. Without giving too much away, there’s a novelistic twist here, from scriptwriter Allan Loeb, who was advised to write this as a novel: “A novelization may be written, but not by me,” he told me. Marc Webb’s fine direction takes the risky narrative strategy to a fully satisfying end. No, Thomas does not meet up with Mimi in Croatia, but he does forge an enviable bond with his dad, despite having slept with his mistress.

Guests for a sumptuous after party at the newly refurbished Bar 65 at the Rainbow Room, quipped, yeah, publishing is really like that. Yeah, right! But hey, there is a love letter quality to the way New York is shown, matched too in the top-of-the-world views from the jewel in Rockefeller Center’s crown. While Cynthia Nixon and Kate Beckinsale greeted well-wishers, Jeff Bridges, though introduced at the MoMA screening, did not make it to the party, and Pierce Brosnan was rumored to be in Hawaii. But London-based Callum Turner, the lead after all, carried on at the bar—he’s also in “Fantastic Beasts”—and Kiersey Clemons told me her next movie is “Hearts Beat Loud”; she’s thrilled that Blythe Danner will play her grandmother.