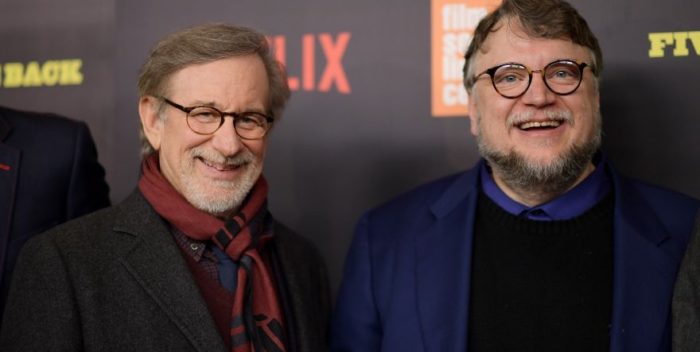 “We still have not come to grips with World War II,” asserted newsman Tom Brokaw, the author of several books on the subject. “It was the largest event in the history of mankind.”

The series shines a light on little known film work of five highly successful mid-century Hollywood directors: John Huston, John Ford, George Stevens, William Wyler, and Frank Capra. Each left lucrative careers to document what was going on in Europe during the war, with life changing results. as Del Toro, Kasdan, Francis Ford Coppola, Paul Greengrass, and Steven Spielberg– who made a special stop to take pictures and answer questions– serve as their voices in this riveting documentary.

It was a star studded evening with playwright Tony Kushner, actress Linda Emond, plus Oren Moverman, Ben Foster, Gay Talese, Bennett Miller, Jeffrey Toobin, and Julie Taymor among those who moved on to an after party at Shun Lee. Much of the talk was about the film’s relevance today. Some footage featured Charles Lindbergh speaking as head of the America First Committee. Well, after Pearl Harbor, we all know how that turned out. Haven’t we heard this sentiment in more recent times?

And aside from the great archival footage, something else was retro, the paucity of women. As Taymor wanted to know: Were there none who could have joined the austere directors asked to speak about the historic filmmakers and their work? This gripe was all in keeping with Guillermo Del Toro’s observation for all, referring to the bravery of the five who came back: They tell us to keep quiet about politics. We have every right—even an obligation—to talk about politics.