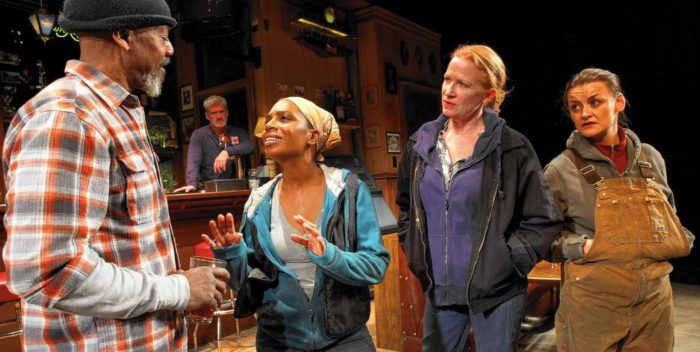 “Sweat” gives poignant voice to a disenfranchised microcosm of the American heartland, as if Michael Moore’s Flint, Michigan had taken center stage. A fine ensemble is featured under Kate Whoriskey’s expert direction whose mecca is a local bar where birthdays are celebrated and the closing steel mill is mourned. It’s “Cheers” with less cheer. The characters are of limited career options and a variety of ethnicities when in 2000, the doors of opportunity slam shut.

Kudos to John Lee Beatty’s set design, for a bar in inviting reds. As quality of life diminishes and houses disappear, friends begin to sneer at one another, culminating in violence. Tracey (a terrific Johanna Day) resents Cynthia’s (the excellent Michelle Wilson) rise to management inciting their sons Jason (Will Pullen) and Chris (Khris Davis) to take revenge on Oscar (a pivotal role for Carlo Alban), of Colombian origin who crosses the picket line. Oscar delivers the play’s final zinger, reminding everyone of who we are as humans.

Much of Nottage’s play is about ancestors both black and white, hardworking people, a theme of August Wilson’s magnificent Pittsburgh Cycle. It is no coincidence that Nottage’s play is set in nearby Reading, Pennsylvania.

At Sunday’s opening, at Brasserie 8 ½, the stars mingled with an array of well-wishers: Stephen McKinley Henderson, who was so great in “Fences” on Broadway, and in the recent movie, was part of the original “Jitney” ensemble and was hobnobbing with Anthony Chisholm who was in the recent “Jitney” Broadway production.

August Wilson’s widow, Consuelo Wilson, who manages his estate with a mission, was also on hand. She told me that While Denzel Washington has vowed to see all of Wilson’s plays produced, she is making sure that each one comes out in a special moment. As everyone supped on delicious beef, short rib risotto, and dim sum, Carlo Alban seemed overwhelmed. He hadn’t slept at all, he said; his mind was racing: “It’s all come to this night, and it went great!”