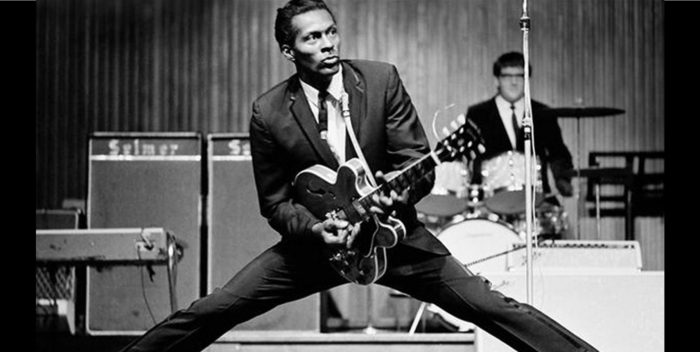 The founding father of rock and roll, Chuck Berry, has died at 90. He laid the complete groundwork for anything you think of as rock and roll, or R&B even, from the guitar riffs to the look. He invented the duck walk. The Beach Boys owe their early career to him, so do the Beatles, to a great extent. Everyone copied Berry’s “Rock and Roll Music.” “Maybelline” and “Johnny B. Goode” were his signature songs, covered over and over. Ninety years is a long life. Berry was an inventor, a genius, a mad man, and just as difficult as he deserved to be. Just watch Taylor Hackford’s great documentary with Chuck, featuring Keith Richards– “Hail Hail Rock and Roll.” Chuck drove the two of them mad.

But watch these videos. Fresh as ever. The hair on the back of your neck still jumps up.

In 1972, when Chuck had been out of the mainstream for several years, he came back one last time with a huge number 1 hit, “My Ding a Ling.” Banned by a lot of radio stations, the record outsold everything he’d done before.