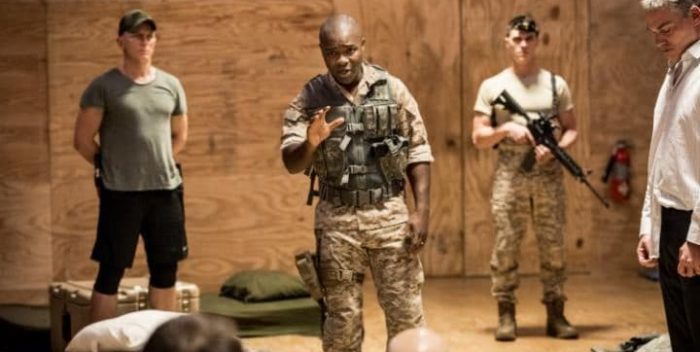 Very few have seen and will see the New York theatre’s most sensational experience of 2016-17. On Wednesday Daniel Craig, David Oyelowo and a stunning cast will give their last performance of “Othello” directed by Sam Gold at New York Theater Workshop. I saw it last night, and all you can say really is Wow.

The very small theater has been totally rebuilt by Andrew Lieberman in plain wood slabs and risers as theater if not in the round, on a runway. (It’s kind of a non-set in a non-theater, making the play all the more mesmerizing.)

Then there’s the audience: last night it was Bette Midler and her husband, Tony Goldwyn, Richard La Gravenese, Bob and Lynn Balaban, Blythe Danner with her director son Jake Paltrow and his photographer wife Taryn Simon, “Moonlight” producer Dede Gardner and actress Britt Marling, and several younger actors. Plus it seemed like the top row of one of the three small sections had been given to school kids.

Barbara Broccoli, who inherited the producing of the James Bond movies with her step brother, had this amazing idea, and it works: to feature her James Bond, Daniel Craig, doing what he really does best– theater. So he’s Iago to Oyelowo’s Othello, and it’s a sight to behold. Craig is excellent. Not taking anything away from him, Oyelowo is boldly the best theater actor of his generation.

It’s a muscular, athletic production. Everyone in the cast with the exception of Rachel Brosnahan (Desdemona) looks like they’ve been to Barry’s Boot camp. Gold has turned Othello’s followers into soldiers of fortune. But their battles, while in their heads, are also played out on a plain stage strewn with mattresses and machine guns. There’s lots of humor, and a party scene (rivaling the one in “The Present” which I wrote about yesterday) where everyone joins in on Drake’s “Hotline Bling.”

But it’s Shakespeare, and extremely adherent to the real play, no kidding. Oyelowo, Craig and Brosnahan are joined by the equally excellent Finn Wittrock as Cassio, Michael Maher as Rodrigo, and Marsha Stephanie Blake as Emilia. The whole crew should be cited, but I’d like to point out lighting by Jane Cox and fight direction by Thomas Schall.

Will Broccoli bring this back, or move it somewhere bigger next fall for a limited run? Up in the air. She told me she can’t film it– there’s no way to film it, although I hope someone makes a video for posterity. It’s just one of those moments in the theater completely unforgettable. That’s a lot to say about a play three hours and 10 minutes long, in a theater that has no snacks or drinks and it isn’t near anything. (New York Theater Workshop does have a water dispenser, and paper cups.)

“Othello” was written by Shakespeare in 1603, and its well known themes include race, miscegenation, revenge, and deceit. It’s a tragedy, with rueful comic moments. This production is equal to the best that the Public Theater ever offered during its run of the Bard’s 38 plays. It’s absolutely fascinating to watch Craig, who we pretty much see as James Bond, as the Machiavellian Iago, scheming, charming, and villainous.

But you’d think after 500 years Othello would finally catch on and see what’s being done to him. Alas, no. Plus, Oyelowo’s reading of the tragedy is so incendiary you feel like you’re hearing this story for the first time. A few times there were actual gasps from the small audience. Now, that’s theater.