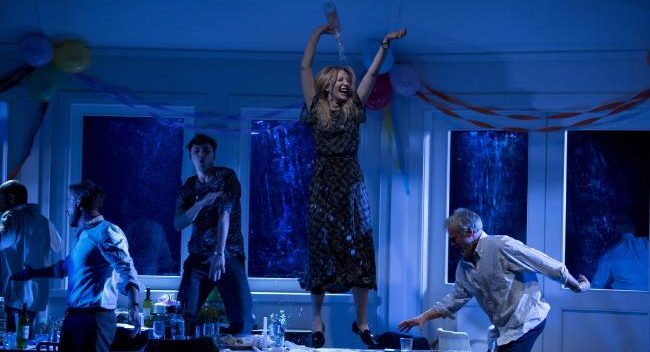 You think you know Cate Blanchett from her sensational film résumé and two Oscars. But you haven’t seen her on stage. A limited group got to see her a couple of years ago with Joel Edgerton in “A Streetcar Named Desire” out in Brooklyn at BAM. But now here she is, at the Ethel Barrymore Theater on West 47th St. and you know she’s got “The Present” in hand.

Upton’s version is pretty great and very different than the Frayn one; Chekhov is probably amused by it in heaven. Upton has retained a lot of the Chekhov but updated it. You do hear the ‘f’ word a lot, references to climate change, and a lot of The Clash used as bumper music. This is not your grandad’s Chekhov. He’s also condensed four acts into two, with a running time (including intermission) of three hours.

Believe or not, the time passes quickly. Upton has found lots of humor and spread it wisely. The audience I saw it with last night was enthralled. There are a lot of laughs. while still retaining the drama of the main character– a rogue schoolmaster named Platonov (Richard Roxburgh) who cannot keep seducing the ladies at his old friend Anna Petrovna’s (Blanchett) Russian estate. Her friends have arrived for her 40th birthday, and you know, a lot will be revealed about her older husband, her three stepsons, and miscellaneous guests.

Give Blanchett a lot of credit because Platonov is the main character no matter how much is updated for Anna. Roxborough doesn’t steal the show, he just occupies the center of it, and he’s a revelation. Even Blanchett knows it. When I saw her after the show, the first thing she said to me was, “How did you like Richard?”

Let’s say Roxburgh leads the magnificent supporting cast. But “The Present” cast is an ensemble, only that Blanchett cannot keep from being the centerpiece. Watching her is seeing a legend at work in her heyday. She is so comfortable on stage you know she could keep going after the third hour. She’s loving Anna, and all the plot twists and turns. The machinations at the estate never get dull.

Indeed, there are fireworks, explosions, gun shots, smoke. Again, no one is knitting on the front porch. And a party sequence toward the end of Act 1 is enough reason to see this production again and again. Anna’s 40th birthday party literally explodes on stage, and the denouement after this catalyst is equal to its highest points. Irish director John Crowley brings Upton’s ideas to life, and it’s interesting– the Irish really get Chekhov. Three years ago I saw an Irish adaptation (directed by Max Stafford Clark, starring Trudie Styler) that got raves. Who knew?

But do see Cate Blanchett now if you can. This is like seeing Janet McTeer–she’s the real real thing, we’ll be talking about Anna Petrovna long after the show closes. And the Tony Awards– this is for them.