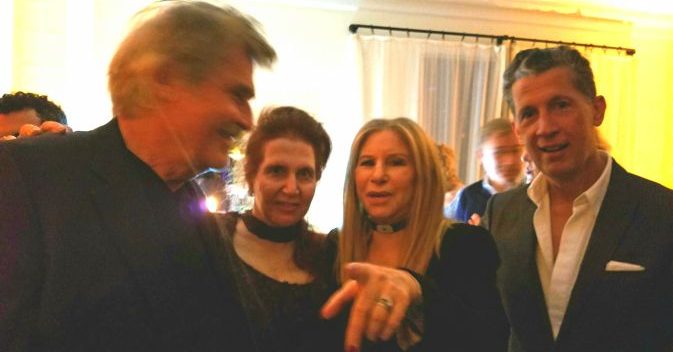 No one knows how to toss a Golden Globe weekend kick off party like W Magazine’s Lynn Hirschberg. The tip of the A list come to the 6th floor suite at the Chateau Marmont in West Hollywood every year for this intimate get together– and there are always surprises.

This year’s surprise came when the party was more than halfway through and loads of celebs and nominees had passed through including Emma Stone, Natalie Portman, Isabelle Huppert, Mahershala Ali and Justin Timberlake with wife Jessica Biel. In a small space, that’s a lot of star power.

But then there’s Barbra Streisand, beneficent Queen of Hollywood, who arrived with her royal hunting party: husband James Brolin, manager of 50 years Marty Erlichman, and publicist Ken Sunshine. Streisand and Huppert huddled on a small terrace, Streisand greeted a screenwriter whose script she’s interested in.

Streisand was like buttah. Lots of pictures were taken with W folk including editor in chief Stefano Tonchi. Barbra said she was glad my mom is such a big fan of her recent album. And so on. Lynn, needless to say, was verklempt. Barbra was the hit of the night. She was kind of like a reassuring presence during a time of strife.