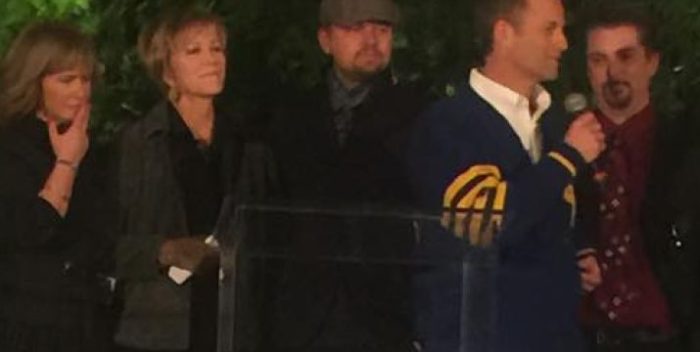 You can only imagine what’s going through Leonardo DiCaprio’s head (take a look at him in this photo) at Alan Thicke’s memorial. Leo, an avowed liberal, backer of Hillary Clinton, is literally staring holes through the back of the head of crazy right winger Kirk Cameron. They were each on the show “Growing Pains” along with Joanna Kerns back in the 1980s.

Thicke’s daughter in law, Dolly, posted this picture and few others on her Facebook page. Dolly wrote:

“Tonight’s memorial for Alan was just about perfect. So much family and so many historic friends came out to remember our beloved father-figure. Speaking for Alan so beautifully was (I’m realizing now) an all-star cast. We heard from our own Robin Thicke who brought up all dear dad’s best friends, Bob Saget, Bill Maher, Alex Trebec who I had no idea had such old deep ties to our family, the entire cast of Growing Pains including Leo and Kirk Cameron who I had the pleasure of meeting for the first time, along with his wife who became an instant friend. The real star of the evening was Joanna Konjevod who came all the way to Santa Barbara with us to help watch our baby girl during the memorial for Brennan and I.”

But oh to be a fly on the wall. Did Leo and Kirk even speak? (I doubt it.) Kirk Cameron put the cray on crazy a long time ago. But what a picture! I hope Bob Saget, who was also a guest, posts some comments soon. Or Bill Maher. Please, guys.