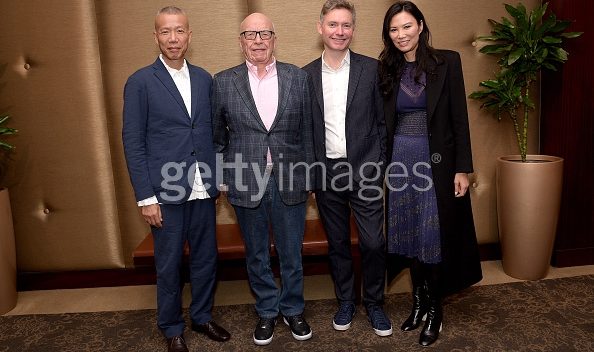 Back on November 21st, Rupert Murdoch– mostly unseen now in public age 85– was photographed at a private screening of a film produced by his most recent ex wife, Wendi Deng.

The screening took place at Dolby 88 on West 55th St. Murdoch is dressed casually, I’d say, to put it mildly, in jeans and boat shoes. His current wife, Jerry Hall, is not with him and doesn’t look from the other photos of the event like she was even there. Murdoch seems, uh, unfocused.

On Wire Image, the photos of the divorced Murdochs comes with special instructions: “Contact your local office for all commercial or promotional uses. New York Daily News OUT”

The New York Post, owned by Murdoch but no longer run by him, ran a brief item in Page Six but didn’t mention the presence of their retired leader.

Directors Bennett Miller (Foxcatcher) and Fisher Stevens (Before the Flood) were among the people who produced the movie with Deng. It’s called “Sky Ladder: The Art of Cai Guo-Qiang” and it’s available on Netflix, directed by Kevin MacDonald.

Murdoch and Hall were last seen photographed together in September, for a “Vogue” party in New York, and prior to that in June in London.

It’s unclear how Murdoch, solo, wound up at the small event, or why, considering his divorce from Deng wasn’t that friendly. Maybe he’s forgotten the whole episode. Murdoch has not been heard from publicly in any substantial way since last March 4th, the day he married Hall and was yanked off of Twitter for good. Prior to that he’d been very active on social media. Shortly after that, the Roger Ailes-Megyn Kelly- Gretchen Carlson scandals all broke. Murdoch has never commented on any of that, on Brexit, or the US elections. Very, very strange, all of it.