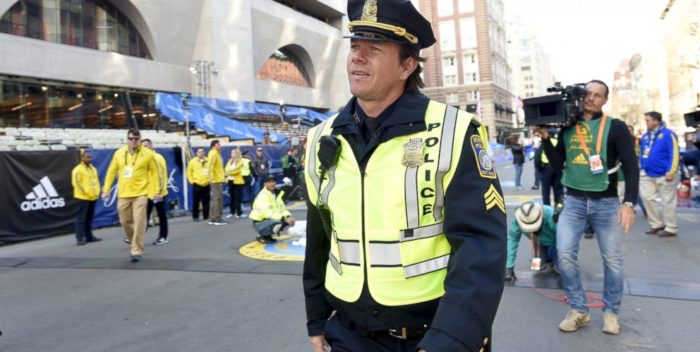 Peter Berg’s “Patriots Day” starring Mark Wahlberg is the unlikely first film of the Trump era. The very powerful movie, about the 2013 Boston Marathon bombing, is pro-police, anti-Muslim and totally populist, all in a good way. Berg and Wahlberg certainly didn’t make it as a Trump era movie– after all, we could have been in the Clinton era. And set in Massachusetts, the demo’s weight on the Democratic side.

But timing is everything, and there will be a lot of people who read into “Patriots Day” a reaction to immigration, terrorism and their consequences. Think of it as Bruce Springsteen’s “Born in the USA” released as it was in the Reagan era. Art is open to interpretation.

I mean it, when I say all this in a good way. The Boston Marathon bombing may not be detailed in your mind if you’re not from Beantown. But it was catastrophic, with 28 victims, many of whom lost limbs. Detailed here for the first time, the bombing– really two occurrences– will literally blow you away. The movie is good, but it’s great when it comes to the actual moment when life exploded unexpectedly on Boylston Street. That set piece, and the chase to arrest the Tsarnaev brothers who perpetrated the crime, are just terrific, edge of your seat episodes.

Most of “Patriots Day” is true. In writing the screenplay, the creators imagined a central cop and his wife played by Mark Wahlberg and Michelle Monaghan to carry the story. In reality, they say they blended a couple of cops into one so that Wahlberg’s Tommy Saunders stands in for them. It doesn’t matter because the device works, and Wahlberg is really great as Tommy (Monaghan also, although her part is small). He could be getting some serious awards action.

The rest of “Patriots Day” is very well cast with a collapsed John Goodman (after stomach band surgery), Kevin Bacon. and JK Simmons as standouts. Nat Wolff and Themo Melikidze are exceptional as psychopathic terrorist brothers who blew up the city. But I was really fascinated by a standalone scene with Khandi Alexander as a CIA interrogorator and Melissa Benoist as Kathleen Russell, the American Tsarnev wife who is still being investigated for helping her husband and brother-in-law.

“Patriots Day” is the story of a small city rallying together during an unexpected terrorist attack. I’ve lived there, and it’s insular place. As Wahlberg said in tonight’s Q&A, I’m paraphrasing, they’re big hearted people, but don’t mess with them. Berg conveys this brilliantly. As far as the Trump reference– this is an ode to the police, and a warning to outsiders. They’re not making it up. This is what happened. I’m curious to see if it isn’t a huge, huge hit on the par of “American Sniper.” Just to give you an idea, a random retired Marine who served in Afghanistan after 9/11 stood up during the Q&A and said he loved it. I think there will be a huge response.