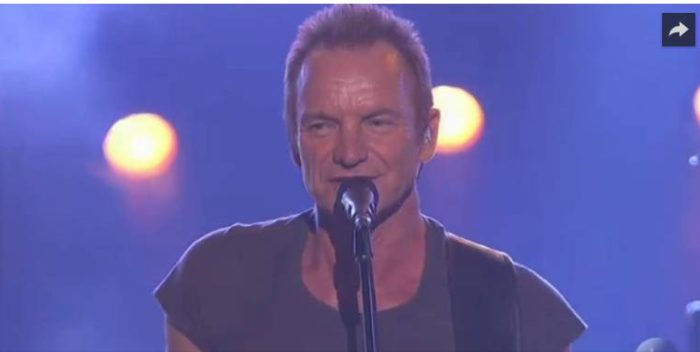 Thank god for Sting and Lady Gaga. Other than their performances, and a couple of interesting moments, the American Music Awards would have been a total visit to junkland.

Sting’s Merit Award copped him a three song medley– and they were without a doubt the best songs of the evening, and not just because there were almost no other songs. “I Can’t Stop Thinking About You,” “Message in a Bottle,” and “Every Breath You Take” must have seemed like a shock to the people in the theater– they could sing along, the songs were actually composed, and the second two have lasted 30 and 40 years. Amazing. Go out and get Sting’s “57th and 9th” or Gaga’s “Joanne.” Shocking.

Sting Performance AMAs 2016 by VIRALVID
The rest of the AMAs were better off seen and not heard. Shawn Mendes, who has such potential, is gradually being destroyed by the demands of the current un-culture. He’s an outstanding acoustic performances, and does have strong songs. But they were drowned by over production both audio and visual.

Other lowlights: Gigi Hadid was upstaged by Hannah Davis Jeter. Hadid was out of her league and over her head as co-host or speaker of the English language. Jeter — in her secondary role– showed real potential for more of this stuff, a la the terrific Chrissie Teigen. (Teigen should have co-hosted, really.) Jay Pharoah just looked uncomfortable.

The Prince award I’ve already written about. Ridiculous. Why didn’t they just do a tribute to Prince? It would have been more effective. Giving him a faux award– well, that’s the AMAs. Next year Thriller will be given Best Halloween song.

Selena Gomez– I like her, and she gave a nice speech about something. She’s been battling lupus and rumors that she could still take Justin Bieber seriously. She has our sympathy. But Artist of the Year? What?

Green Day as least slagged off Trump. And Idina Menzel, who is usually more grating than Parmesan cheese, got in a jab for “Hamilton” and Broadway. So that was the good news.

My biggest laugh was The Chainsmokers. Have they ever smoked anything other than a fish? They look like they should be called The Milk Drinkers. And twentyone pilots? They need passengers.

Just to remind you, the AMAs are a product spotlight, they are not real awards. Also, if you perform there, the Grammys will not have you– or at least, not performing in a similar way. Hence, no Adele on the AMAs. No Beyonce. And I guess Drake– who lets the AMAs cover him like a Walmart blanket– is out of the Grammy run, too.

Finally: what to do about Ariana Grande? She has a great voice. She’s wasting it on crap. No one will ever remember these “records” or whatever they are. She has to put her voice to some better purpose.