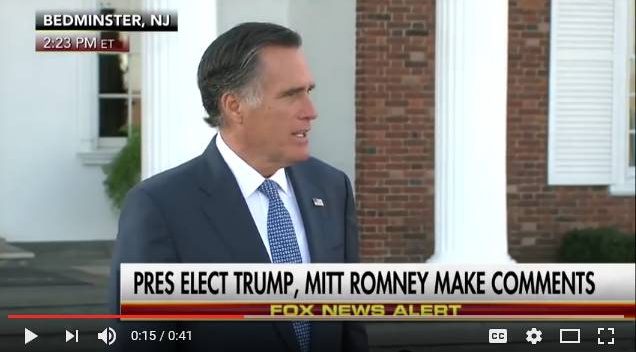 A meeting yesterday between Mitt Romney and Donald Trump should already be shaking up the global theater community — especially after the “Hamilton” scandal of Friday night on Broadway. Mike Pence was booed by the “Hamilton” audience, read a letter by the “Hamilton” cast. Trump responded by demanding an apology and tweeting that the cast “couldn’t memorize their lines.” (He unTweeted that a little while later.)

Yesterday Trump met with Mitt Romney about possibly becoming Secretary of State. Romney made a statement that he and Trump had had a “far reaching” conversation about “theaters around the world” that were of “real significance” to the United States. He didn’t just mean the Richard Rodgers Theater, where “Hamilton” is playing, or just Broadway, but implied theaters everywhere– maybe London, where are there are many, as well as London, Rome, Tel Aviv, Cape Town.

Will Trump, Pence and Romney be concentrating on some kind of drama purge after January 20th? Will it just be musicals, or plays, too? Stay tuned…(PS I do think Romney meant ‘sites of conflict’ but still…)