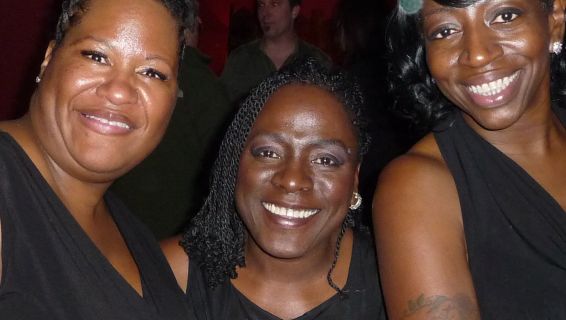 Heartbreaking: Sharon Jones, the late blooming R&B star who could literally turn the world on with her smile, has died at age 60 from pancreatic cancer.

Sharon was a cherub, and a throwback as a singer. She should have either been 10 years older, or had her hits 20 years earlier. You pick.

I first saw her and her back up group The Dap Kings at Harvey Weinstein’s wedding to Georgina Chapman in December 2007. All of a sudden, at age 51, a star was born. Where had she been? Who was she? There were so many questions. (She was already five years into a late-blooming career.)

Sharon and the Dap Kings became overnight sensations in the next year. She already had an album out called “Naturally.” But her 2007 release, “100 Days, 100 Nights” and its title track took off like rockets. In 2010, Sharon released “I Learned the Hard Way,” re-confirming her new star status. But then the cancer came, and there was a long break.

Finally in 2014 she released “Give the People What they Want.” Oscar winner Barbara Kopple filmed her for a documentary, “Miss Sharon Jones!” which was nominated for the Critics Choice Award and is eligible for this year’s Oscars. The film debuted at the Toronto Film Festival, where Jones revealed her cancer had worsened.

I wrote about Sharon when she performed on December 30, 2010. We hung out after the show. She was a special, special person. What was she doing here for such a short, crazy time? She was lighting up our lives. In heaven today, the whole R&B world no doubt met her with cheers as big as our tears. We will never forget you, Sharon.