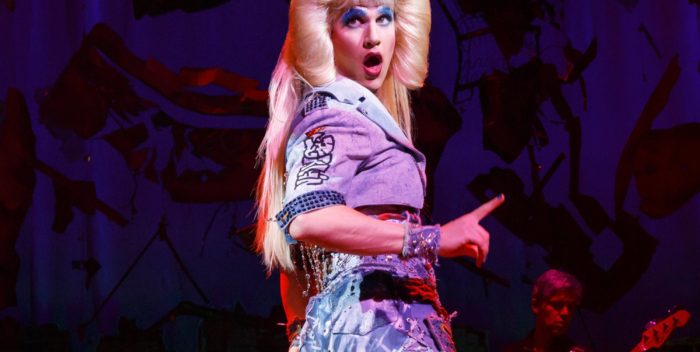 HOLLYWOOD– Please leave me alone! Hedwig implored Donald Trump at the opening night at the recent premiere of “Hedwig and the Angry Inch,” at the Pantages in Hollywood. “The guy with the Tic Tacs is stalking me on Grindr (a popular gay dating app) and wanting to grope me. Please leave me alone!”

As an avid fan since the show opened up at Jane Street in New York years ago, I’ve been looped into the Tony award winning “Hedwig and the Angry Inch” — which premiered on Broadway in 2014. John Cameron Mitchell’s brilliant book, along with Stephen Trask’s rock score, created a show that has been a lasting cult hit, cultivating Hed-heads around the world.

Hedwig, an East German rock singer– perhaps a man or a woman gender fluid sensitive soul — who endured a botched sex change operation, is played by the truly brilliant Darren Criss of “Glee” fame. Criss has experience with the role, he stepped in for Neil Patrick Harris on Broadway. Criss captures the soulful pain and the intimate crises that befall the long suffering Hedwig. The show is site specific, with Hedwig telling the audience that the Pantages is available, at the request of producer Bobby Nederlander, because of the sudden closing of “Hurt Locker: The Musical.” (I have to admit I picked up my “Hurt Locker” playbill before the show started and I was baffled, but a trashed car and bloodstains on the stage were obvious clues.)

Criss added to the Trump banter with, “If I wanted to see a mess in an L.A. theater, I could just see L.A. Theater.”
He also chided one of this band members with a reference to his “Glee” co star, “Lea Michele could do it better.”

Mitchell played the role for years, then when the show hit Broadway, Neil Patrick Harris stepped into Hedwig’s high heels. Criss played the role on Broadway as well and is starting the North American tour. Luckily, Lena Hall, who plays her husband Yitzhak (she won a Tony for the role) reprises her role here and will play the role of Hedwig occasionally as well. Michael Mayer does a masterful job of directing.

Criss is simply fantastic is the role, conveying soulful pain as well as pitch perfect comic timing. “I lost an uncle at Auschwitz, granted he fell out of a guard tower.” When the audience groaned Criss quipped back, “Too soon?” Criss is irresistible; his performance will be an enduring Hedwig. The tale is fraught with drama, Hedwig’s bi-polar behavior, her scandalous background with the now famous rock star Tommy Gnosis, while her career is on life support. The story, the concept of “Hedwig” has ironically turned into a musical for the ages. Exciting, clever, loud, poignant, theater perfection. Don’t miss it. The show runs till November 27th at the Pantages in Hollywood, then tours after that.