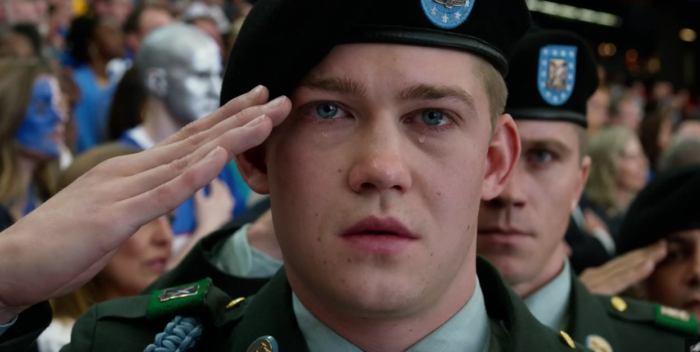 I love Ang Lee’s movies. most of them, I really do, from “The Ice Storm” to “Sense and Sensibility” to “The Wedding Banquet,” “Eat Drink Man Woman,” “Brokeback Mountain,” parts of “Taking Woodstock,” and all of “Life of Pi.” Who doesn’t love Ang Lee? Even “Ride with the Devil” has its moments, and gorgeous cinematography.

But “Billy Lynn’s Long Halftime Walk” is a walk too long, too tedious, and at $50 million (after tax breaks) unnecessarily expensive. Bring your Dramamine, because Ang is besotted by a new process that combines 3D with something called 4K, which produces 120 frames per second. Not only do you have to wear special glasses for it, but when the main character keeps asking for Advil in the film, you will be too. This process means ultimate clarity, according to Lee. Forget it. I don’t care how many frames there are per second in a movie, and no one else does. We just want a good movie, well acted, that looks great with an interesting story.

“Billy Lynn” fulfills little of the above. First of all, whatever this new process is– please, no one use it again. It makes the screen look like a video show or a soap opera. It has that HD effect you’re always trying to fix on your Smart TV. I don’t know what Ang Lee was thinking. He said before last night’s screening that he was very nervous. And he did say, “I am not crazy.” But something sold this Oscar winner on a pig in the poke. The lighting is bad, close ups are horrendous, no favors are given to even good looking actors, forget old ones are homely types. Steve Martin, a handsome man, should sue.

The story: Billy and his Bravo Squad have had a huge military victory in Iraq, and now they’re in the States, on a break, being feted by people who don’t understand what they’ve been through. No one knows the trouble they’ve seen. On top of that very few of the fans, the workers at the stadium or even the security team seem to have any respect at all for these war heroes. This is seemed to me very typical of Vietnam era soldiers, but not Gulf War or Iraq, Afghanistan, etc. The many attacks on the soldiers are lined up in service of Billy and his pals being able to observe that it’s more dangerous at home than in the Middle East.

Some of the film works when the focus is on Billy’s family and the technology is secondary. What Ang Lee excels at is intimate moments. And when Billy has a final talk with a cheerleader (there’s been some quick backstage intimacy) there’s a brutal but fleeting realization that she finds him attractive because he’s a war hero– nothing less will do.

The actors chosen for most of the roles are a problem. Everyone is wild about the star, 19 year old British newcomer Joe Alwyn. But Alwyn needed to be surrounded by strong actors. Garrett Hedlund does his best, but either the dialogue doesn’t suit him or the whole thing was a bad idea. Much worse by far is Vin Diesel as a kind of Zen officer in Billy’s Bravo troop in the Middle East. Did you ever think Vin Diesel would be in an Ang Lee movie? No, and there’s a reason for that. He is painfully under-equipped.

This kind of movie begs for a Robert Altman touch– satire with humor. Lee treats it straight on, with no irony or subtlety. Billy’s family, save for Kristin Stewart as his anti-war sister, are badly cast, and they are miserable people. (Stewart is excellent, but she’s better in other recent films.) Steve Martin plays the central casting patriotic head of the NFL team that expects Billy and co. to parade around like monkeys at half time.

But again, a Barry Levinson (Wag the Dog) would have been the director with the right temperament for such a satire.

Again, the publicity hook is the technology because the movie itself is not there.

Here’s the trailer, which is in regular old 2D. If only the movie looked this way: