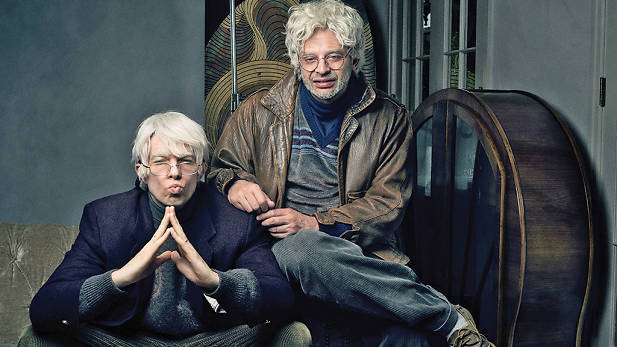 Think you’re hip? Know a lot of current and pertinent cultural allusions? Then “Oh Hello,” is for you, that is if you can keep up with the riffs served by John Mullaney and Nick Kroll in this 90 minute machine gun fire “play” that just took over Broadway.

Believe me, the pop references come faster than those chocolates on the “I Love Lucy” conveyor belt.

Plus, every night you get a surprise: a cameo from a celebrity who may or may not know what the hell is going on, onstage at the jewel box Lyceum Theater. Luckily, the great Alan Alda went along with it last night at the opening performance, coming on stage and participating in about a 15 minute segment that he managed to steal, with aplomb, from the two very silly, very smart players.

Since the show started off Broadway at the Cherry Lane Theater, then went on a tour and to Los Angeles, Mullaney and Kroll have always had references to Alan Alda. They idolize him. So the “MASH” vet was persuaded to appear on opening night. “We didn’t have to change much,” director Alex Timbers told me at the after party at Brasserie 8 1/2. “It was already there.”

Still, Alda rose to the occasion, especially when the guys discovered spontaneously that he’s Italian, not Jewish. Alda gave them his real Italian name– Alphonso Joseph D’Abruzzo- from which they have not yet recovered. (If only Alan Alda would do the show every night!)

Other celebs during previews have included Josh Groban and Katie Couric. Jon Hamm did it during the Cherry Lane run and now, for no reason, his photo and that of fellow “Mad Men” star John Slattery, is in the Playbill with Mullaney and Kroll as if they were in the cast. They are not. Their bios even appear in the Playbill as understudies. They are not. There is also a bio for an unseen character named Ruvi Nandan, who is spoken to and spoken of, but doesn’t speak during the show or exist.

So yes, “Oh Hello” has a story and a bit of a plot, a set, lighting, and a director. It also has costumes, especially wigs. Mullaney and Kroll play Upper West Side losers George St. Geegland and Gil Faizon. They are totally unsuccessful actors who have lived together like Felix and Oscar in a huge rent stabilized apartment for 40 years. Gil’s closest brush with success was auditioning to a voice over for CBS. George has written a lot of unproduced plays. But now they are going to perform a new play for us, playing characters with similar names.

And so they do, or try to. There isn’t much of a play, and it’s constantly interrupted by the two actors. There is some music, all of it by Steely Dan, whom the guys adore. I do, too, so it was a pleasant surprise to hear “Rikki Don’t Lose That Number” and “Kid Charlemagne” playing as we got to our seats. Gil and George go to see Steely Dan when they play at the Beacon, same as John Mullaney in real life. By coincidence, Steely Dan is at the Beacon now (in real life). But Mullaney told me: “This was the only Monday night I could have seen them, but we were opening the show.”

The real Jon Hamm was there in the audience, as were Jimmy Fallon, and Mario Cantone, and what seemed like a lot of people who know Kroll and Mullaney from Comedy Central. Most of the show I can’t explain, starting with a bizarre interest in tuna that gave the guys a theme for their cable access TV show. “Oh Hello” is party Wayne’s World, part “SNL” “Wild and Crazy Guys,” heavily birthed by Lily Tomlin’s “Search for Signs of Intelligent Life in the Universe.”

This show is a limited run, so run right over there. This video resembles the show, but isn’t party of it– just to give you an idea. The live show is 100 times better.